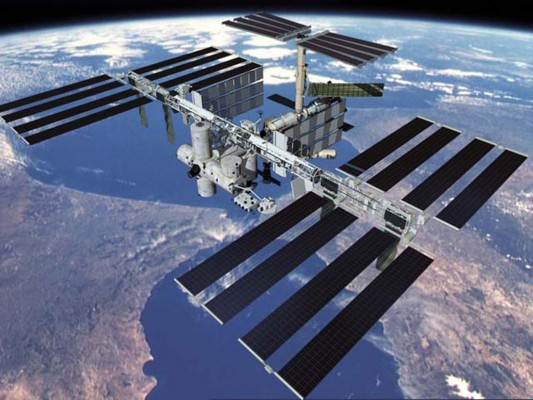 Okay… now this is cool, considering what I wrote about two days ago. According to the Orlando Sentinel, NASA is proposing building a staging outpost at the Earth-Moon Lagrange Point 2.

Documents obtained by the Orlando Sentinel show that NASA wants to build a small outpost — likely with parts left over from the $100 billion International Space Station — at what’s known as the Earth-Moon Lagrange Point 2, a spot about 38,000 miles from the moon and 277,000 miles from Earth.

At that location, the combined gravities of the Earth and moon reach equilibrium, making it possible to “stick” an outpost there with minimal power required to keep it in place.

Lagrange points are the five positions in an orbital configuration where a small object affected only by gravity can theoretically be stationary relative to two larger objects (such as a skyplex with respect to a planet and its moon). The Lagrange points mark positions where the combined gravitational pull of the two large masses provides precisely the centripetal force required to rotate with them. They are analogous to geostationary orbits in that they allow an object to be in a fixed position in space rather than an orbit in which its relative position changes continuously....

To get there, NASA would use the massive rocket and space capsule that it is developing as a successor to the retired space shuttle. A first flight of that rocket is planned for 2017, and construction of the outpost would begin two years later, according to NASA planning documents.

Potential missions include the study of nearby asteroids or dispatching robotic trips to the moon that would gather moon rocks and bring them back to astronauts at the outpost. The outpost also would lay the groundwork for more-ambitious trips to Mars’ moons and even Mars itself, about 140 million miles away on average.

Wait… what? We have leftover parts from the ISS? Like spares or are we talking about un-launched modules? You know what… I probably don’t want to know…

Anyway… compared to the idea of building a lunar supercomputer, this one actually sounds like a pretty good idea. I mean, it solves a problem (putting a way-station into a relatively low cost to operate zone), it’s pretty inspirational (it’s a freak’n space station that doesn’t orbit Earth and might actually be useful, and it’s a jumping off point for additional projects (lowering its mean cost and the costs of those projects). It’s win-win, right?

Well… maybe not so much… 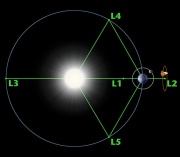 A map of Lagrange points within the Solar System

NASA Chief Charlie Bolden briefed the White House earlier this month on details of the proposal, but it’s unclear whether it has the administration’s support. Of critical importance is the price tag, which would certainly run into the billions of dollars.

But how the idea — and cost — play with President Barack Obama, Congress and the public remains a major question. The price tag is never mentioned in the NASA report.

Spending is being slashed across the federal government in the name of deficit reduction; it’s unlikely that NASA in coming years can get more than its current budget of $17.7 billion — if that.

Understandable. I mean, the frick’n government is spending money like… frankly, it’s other people’s money but the bills are coming due so why blow it on a space program when, last anyone checked, there aren’t any voters in space. So, hey…

But this one really chaps my ass:

A second major concern is astronaut safety. It will take days to get to the outpost — the farthest NASA has flown humans since the moon missions of 40 years ago — making rescue and supply missions difficult. The planning documents are unclear on whether astronauts would be permanently stationed at the outpost or there part time.

Well… yeah, sure. We obviously don’t want to send people out there knowing they’re not coming back. But what kind of rescue operations can realistically be planned in space anyway? I mean, beyond the “incredible, disposable space station“?

I’ve wondered before how much as astronaut’s life is worth or, more accurately, how much value we should place on their lives versus the benefits of space exploration, so it would really piss me off to see this whole neat idea canned because we don’t have a 99.9999% certainty that anyone we send up will be coming back. Because, seriously, if there was only a 50/50 chance of getting home, I’d still volunteer and I bet lots of others would too.

So what’s going to come of this proposal?

If I were a betting man, which I am when two dice and a come out roll are involved, I’d say this is going nowhere. It’s an awesome idea, and might one day happen, but I don’t think it’s going to happen with this president. Or the next one. The truth is, the US just doesn’t have the political leadership or will to see a project like this through.