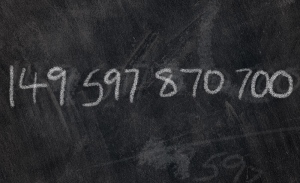 This almost passed without my notice but apparently the Astronomical Union decided to change the distance represented by Astronomical Unit to exactly 149,597,870,700 metres. Apparently, the old number could vary because of… well… general relativity.

From a Nature article on the subject:

The distance between the Earth and the Sun is one of the most long-standing values in astronomy. The first precise measurement was made in 1672 by the famed astronomer Giovanni Cassini, who observed Mars from Paris, France, while his colleague Jean Richer observed the planet from French Guiana in South America. Taking the parallax, or angular difference, between the two observations, the astronomers calculated the distance from Earth to Mars and used that to find the distance from the Earth to the Sun. Their answer was 140 million kilometres — not far off from today’s value.

Until the last half of the twentieth century, such parallax measurements were the only reliable way to derive distances in the Solar System, and so the au continued to be expressed as a combination of fundamental constants that could transform angular measurements into distance. Most recently, the au was defined as (take a deep breath): “the radius of an unperturbed circular Newtonian orbit about the Sun of a particle having infinitesimal mass, moving with a mean motion of 0.01720209895 radians per day (known as the Gaussian constant)”.

The definition cheered fans of German mathematician Carl Friedrich Gauss, whose constant sits at the heart of the whole affair, but it caused trouble for astronomers. For one thing, it left introductory astronomy students completely baffled [..]. But, more importantly, the old definition clashed with Einstein’s general theory of relativity.

As its name implies, general relativity makes space-time relative, depending on where an observer is located. The au, as formerly defined, changed as well. It shifted by a thousand metres or more between Earth’s reference frame and that of Jupiter’s, according to Klioner. That shift did not affect spacecraft, which measure distance directly, but it has been a pain for planetary scientists working on Solar System models.

All very interesting… and I’m glad we’ve got a firm number on this now and all but, really, what’s the big deal? A pain for building Solar system models? Really?

When it comes right down to it, it’s always been a made up number anyway. And making it a constant doesn’t make it any less made up. After all, Earth’s orbit is elliptical anyway, so there will be times when it’s longer or shorter than that, unless they chose a number on the inside or outside.

Either way, aside from model making scientists, it still doesn’t matter. It doesn’t give anyone an answer for how far away the Earth is from the Sun today. And, lastly, it’s just a number we use to try and tell ourselves where we are in Solar System. You know what the number would be if Earth orbited at the distance of Mars? 227,900,000,000. Or probably something like it.

We (and by “we”, of course, I mean humans) invented the damn number so we can change it any time we like!

More interestingly, honestly, is how sci-fi writers use it to describe the distances between things. I use it, for instance, on the Travel Times tool I put together. Why? Because it has less digits than using plain old kilometers. A half-million AUs is easier to put there.

But what does it mean to the people who would be living in the world? Not a damned thing. That it’s the distance between the Sun and the Earth wouldn’t matter in the least. No more than the origin of the mile has any effect on the way Americans think of or use it.