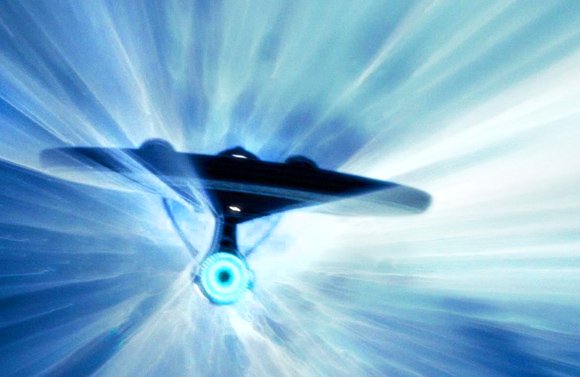 According to Universe Today, it would seem that warp drives have a real killer downside:

Proposed by Mexican theoretical physicist Miguel Alcubierre in 1994, the [Alcubierre drive] would propel a ship at superluminal speeds by creating a bubble of negative energy around it, expanding space (and time) behind the ship while compressing space in front of it. In much the same way that a surfer rides a wave, the bubble of space containing the ship and its passengers would be pushed at velocities not limited to the speed of light toward a destination.

Of course, when the ship reaches its destination it has to stop. And that’s when all hell breaks loose.

Researchers from the University of Sydney have done some advanced crunching of numbers regarding the effects of FTL space travel via Alcubierre drive, taking into consideration the many types of cosmic particles that would be encountered along the way. Space is not just an empty void between point A and point B… rather, it’s full of particles that have mass (as well as some that do not.) What the research team — led by Brendan McMonigal, Geraint Lewis, and Philip O’Byrne — has found is that these particles can get “swept up” into the warp bubble and focused into regions before and behind the ship, as well as within the warp bubble itself.

When the Alcubierre-driven ship decelerates from superluminal speed, the particles its bubble has gathered are released in energetic outbursts. In the case of forward-facing particles the outburst can be very energetic — enough to destroy anyone at the destination directly in front of the ship.

“Any people at the destination,” the team’s paper concludes, “would be gamma ray and high energy particle blasted into oblivion due to the extreme blueshifts for [forward] region particles.”

Obviously, for the Unified Republic of Stars, this kind of… well… sucks. The Alcubierre Field is exactly how it was described that interstellar travel would take place. Not to mention cool things like a “hot entry”. So… in this respect, the URS has become a little bit less science and a little bit more fiction.

Or should I change it?

The 'hot entry' is a form of atmospheric re-entry, frequently credited to Stewart Todd 'Dutch' Warner. It describes a short window between coming out of FTL and entering the atmosphere, often at blistering speeds. It was invented as a way to avoid authorities attempting to inspect or prevent ships from landing on a planet....

Will there be any technology, theoretical or possibly real, that might actually allow humans to cheat Einstein’s stupid law about traveling faster than light? I sure as hell hope so because that’s part of what makes space cool. Going there.

If a person’s stuck in one place their entire life or will probably die in transit then that’s no fun. What made Star Trek so much fun for me as a kid was watching Kirk and Picard get caught up in various situations because they were there.

So are wormholes now the future? Will that be the only possible way to theoretically travel between stars?

Or, at the end of the day, does it even matter? When Star Trek aired, there wasn’t even a theoretical basis behind the warp drive to begin with. The fact that there briefly was merely made the show look prescient but now that some joy killers in Australia (Peace Keepers, the lot of them) have poked it full of holes, I doubt anyone running the franchise now has any plans on revising their FTL technology.