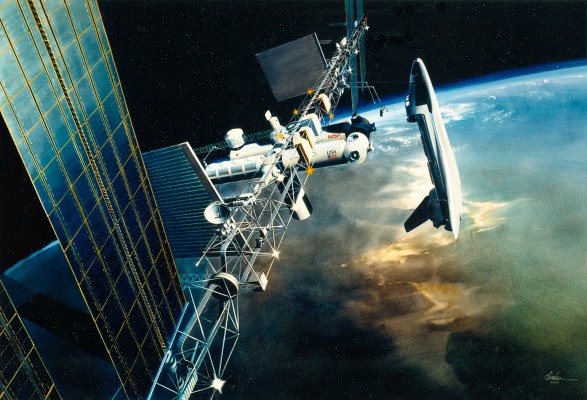 So… Wired is again becoming one of my favorite sites. They’ve really been on the ball with a lot of facinating articles about NASA and science. Yesterday was no different. In an article titled “Space Station Columbia“, David Portree outlines several of the space station plans NASA and a contractor began toying with.

The first U.S. space station was Skylab, which NASA carefully dubbed an “Orbital Workshop” in order to distinguish it from the “real” space station it hoped to launch into low-Earth orbit (LEO) before the end of the 1970s. Skylab — a converted 22-foot-diameter Saturn S-IVB rocket stage — was launched on the last Saturn V rocket to fly. Three three-man crews lived and worked onboard the single-launch station for a total of 171 days between May 26, 1973 and Feb. 8, 1974.

Nearly three years earlier, budget cuts had killed the Saturn V, so that NASA had been forced to abandon plans for a single-launch, 33-foot-diameter, multi-deck core space station. The Space Shuttle, originally intended as a cost-saving reusable space station crew and cargo transport, was tapped to serve also as the station’s sole launch vehicle. This meant that the Shuttle Orbiter’s payload bay dimensions (15 feet in diameter by 60 feet long) and maximum payload mass (in theory, about 32.5 tons) would dictate the size and mass of station modules and other components.

So… in 1981, while waiting for the shuttle to finish it’s testing…

[..] engineers at NASA’s Johnson Space Center had been at work for two years on a design for a Shuttle-launched space station that they dubbed the Space Operations Center. The SOC included a laboratory for experiments in microgravity, but it was conceived mainly as a construction site for large structures, a servicing center for satellites, and the home port of a small fleet of space tugs. It was intended, in fact, to serve as a space shipyard, the take-off point for voyages beyond LEO and the industrialization of space.

Obviously this would be a big project. But Reagan wouldn’t publicly endorse it and public support was… weak… Still…

[..] NASA refused to abandon its plans for a shipyard in orbit. In August 1984, the space agency released a “reference configuration” intended to guide aerospace companies bidding on space station contracts. Called the “Power Tower,” it included a 400-foot-long single main truss where SOC-like space construction hardware might eventually be mounted. In NASA artwork depicting the station, featureless boxes stand in for unspecified large user payloads and hoped-for shipyard elements.

From the Power Tower evolved the “Dual Keel” in late 1985. In May 1986, NASA released its Space Station “Baseline Configuration.” It was a Dual-Keel station measuring 503 feet wide and 361 feet tall (image at top of post). The new design included about twice as many truss elements as the Power Tower, providing ample room for both space-facing and Earth-facing user payloads and eventual addition of space construction facilities. Assembly in orbit was to begin in 1992 and be completed by Reagan’s 1994 deadline.

The Baseline Configuration was dead on arrival, however, because of the Jan. 28, 1986 loss of the Shuttle Orbiter Challenger and its seven-member crew.

Needless to say, NASA’s plans kept getting more and more stripped down and less impressive by the day. Eventually they settled on the “Freedom” station design that would evolve into the International Space Station we all know and… er… love.

But one company, Space Industries Incorporated (SII), working with Rockwell, who admittedly built the space shuttle and was probably looking to capitalize on that, came up with another interesting design they called the Orbiter Derived Station. From the article:

[..] SII proposed to draw upon Space Shuttle design heritage and operational experience. Specifically, the company proposed that NASA launch in 1996 an unmanned “stripped-down” Orbiter – one without wings, tail, landing gear, body flap, forward reaction control thrusters, or reentry thermal protection – to serve as Freedom‘s largest single element. Removing systems with a total mass of 45,600 pounds would boost the Orbiter’s payload capacity to 81,930 pounds, permitting it to transport a 56.5-foot-long pressurized module permanently mounted in its payload bay and four pairs of rolled-up 120-foot-long solar arrays under streamlined housings along its sides. The pressurized module would include a single docking port and a hatch linking it to the stripped-down Orbiter’s two-deck crew compartment. In effect, SII’s approach would briefly restore the space station launch capability lost when the U. S. abandoned the Saturn V rocket.

Copying NASA parlance, SII referred to the launch of the stripped-down Orbiter as Mission Build-1 (MB-1). Upon achieving [..] orbit [..], the ODS would turn its payload bay toward Earth, open its payload bay doors to expose the pressurized module and door-mounted radiators, and unroll its solar arrays to generate up to 120 kilowatts of electricity. At that point, the ODS would achieve Man-Tended Configuration. MTC meant that the station could be staffed while a Shuttle Orbiter was docked with it. According to SII, NASA’s Freedom would not achieve MTC until MB-6, and its solar arrays would not generate 120 kilowatts until MB-10.

It’s an interesting concept. I mean, the space shuttle was huge. It could hold a school bus in its cargo bay. Using that as the base for the station would mean NASA could achieve a useable space platform in a really short time. It would sacrifice a shuttle, sure, but, hey, Rockwell was on the job there, right? Another shuttle coming right up.

Naturally, NASA didn’t go for it and pushed for the Freedom design instead and from there, it turned into the ISS. And we all know how long that took to get built.

If you’re interested and want to know the full specs in complete detail, I highly recommend reading the article. Unfortunately, what it really doesn’t go into is whether the idea was ever given serious consideration. It says the most controversial aspect of the plan was to use Columbia as the orbiter that would become the station, it being the oldest and heaviest and all, but nothing about whether NASA really took a serious look at it. What it does say is that the “Freedom” design had been public for three months before the final report.

Now, this is just conjecture on my part, and I could totally be wrong, but given the NASA in the 80’s that I grew up with, I think it was probably more a case of NASA having a plan in hand and refusing to let go, like a dog with a bone. And look what we got.

I’m not against a space station if it serves some kind of utility in the overall mission of getting people to other worlds. (ahem… Mars?) But what we have now is such a joke, I’d have to laugh to keep from crying. The last days of the shuttle were spent servicing the goddamned thing and for what? Meanwhile, they accomplished one last Hubble servicing mission when that probably should have been its goal all along if it wasn’t going to build something useful.

I fully realize that the ISS is the stripped down version of the utility station NASA originally planned but… damn. Once the core purpose is removed, give up already and move on to something that will actually be useful. Instead we spent billions building the ISS and for what? How are we better off? How does a treadmill named COLBERT advance us in any way? 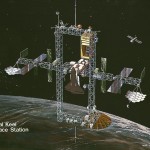 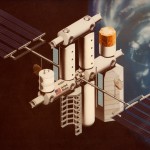 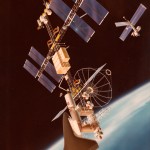 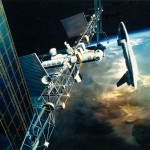 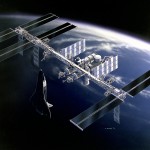