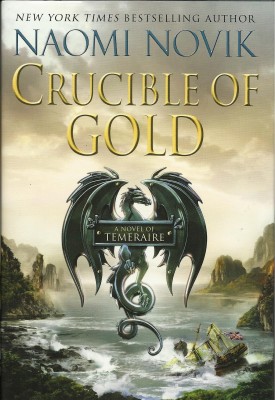 Tragically, interesting space news has been slow and I’ve been too busy with my consulting work to pontificate on other random things. When I get home, I’m usually so exhausted I either curl into a fetal position and numb myself with television or I’m so sick of looking at a screen that I lie down with a book. The book that I’ve been reading for the last week has been Naomi Novik’s new entry into the Temeraire series, Crucible of Gold.

For those who haven’t read the series, imagine that Russel Crowe movie Master & Commander and populate it with dragons. That’s essentially the premise. And, as someone who read through all twenty of the Aubrey/Maturin series by Patrick O’Brian on which the movie was based, I blew through the first three books of the series almost overnight when they came out a few years ago. 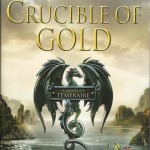 They were clever and original and extremely well written. Sometimes the language could be a bit difficult because, like O’Brian, they were not just set in the early 19th Century, they were attempting to read like something from the same period as well. But the stories and characters were rich enough that, like watching Shakespeare performed well, you soon forget about the language and fall into a kind of a rhythm.

There were some problems, of course, but most of these probably stemmed from the fact that Novik is neither English nor a historian of the British Navy. By this I mean, where O’Brian wrote convincing dialog in the English at the time and spelling in the British manner, Novik sometimes coming off sounding more like she’s watched a lot of British television and adapted a few turns of phrases. And while O’Brian was a master of describing ships and naval action, Novik often misnames parts of the ship and where they are. For instance, a naval ship does not have a “crows nest” that basket at the top of a mast. Those were almost exclusively found on whalers and she described on ship as having a distinctive white keel that gave it something of a skunk appearance. Keels, of course, are the backbone of a ship and run down under the water, covered over with the timber that make up vessel.

Still, all of this could be ignored because of the originality of stories.

Unfortunately, Novik’s use of the language from the time has become so convoluted that this book, like the one before it, has become almost a challenge from her to her readers to actually make it all the way through. Offered as an example:

Temeraire had scarcely understood at first what Hammond was about; it did not seem reasonable to him that anything so momentous should be attended with so little ceremony or notice, but he recalled that just so had it happened to begin with that Laurence had lost his rank. Temeraire had known nothing of it, until on afternoon someone was calling him Mr. Laurence, and the golden bars had gone; and now here they appeared again as swiftly, a lovely gleam in Hammond’s palm.

Laurence was silent, when Hammond had finished expounding on the mission; Temeraire looked at him anxiously. “It does not seem to me there is anything very unpleasant in what Hammon is asking,” he ventured. He could not–naturally he did not wish Laurence to accept his commission back, if it only meant being ordered to do something dreadful, which they should have to refuse, and then have the same unpleasantness of being called traitors all over again; but it was very hard to have such a chance extended and then snatched away.

Yeah… The bulk of that second paragraph? One sentence. Like she couldn’t decided whether to use one kind of punctuation or all of it.

It’s a complete mess of winding, run on sentences where one kind of punctuation will end an aside opened by another. In this case “He could not” is interrupted by an em-dash and then returned to with the semi-colon after “all over again”. At least I think so. There are so many commas and other things going on, I’d love to see if anyone could properly graph the information being delivered.

Before I sound like some kind of punctuation snob, consider that most people don’t even know what a semi-colon is used for today. In many instances, the em-dash is used in its place, as it is also used instead of parenthesis in a lot of modern writing. Whether this is right or wrong is really up to whether the reader can understand what’s written on the page. But there are examples even worse than this that run throughout the entire book. And while I can say some degree of getting into the language flow still remains, the sentence construction yoga that Novik performs regularly in a seeming attempt to be more “authentic” still made me have to stop and sometimes re-read an entire page.

Even if one can successfully argue that the language has become more authentic than the earlier books, it’s undermined by the fact that it’s all spelled American English, something I never cared about in her more readable work.

Unfortunately, the entire Temerarie series is now burdened by it’s long history and these sentences are most likely a result of the author trying to squeeze in enough information about past events for new readers while making it unpenetrable to only the most die hard fans willing to stick it out, something new readers by their very nature aren’t. And, equally as sad, the characters that, in the early books, were interesting and fascinating to learn about have become utter bores, again weighed down by the history of the series.

Captain Laurence, Temeraire’s nominal master and commander but really his human companion, was once a man of action, a former Navy man drafted by circumstances into the Aerial Corps. Now, five or so books later, he’s been convicted of treason and transported to Australia where the “action” of the last book took place. Suddenly he’s offered an opportunity to regain his honor. Does he jump at it? No. For most of the book instead he complains about what he might have to do for it, constantly remarking that he’ll never be fully accepted back into service.

Well, no shit. Treason does that whether the act was actually right or wrong. But rather than be the principled man who is convinced he acted correctly, charging back into the middle of the action, critics be damned, we have a winging dude who’s constantly embarrassed and unsure.

O’Brian defined early on that Captain Jack Aubrey of his series was a god at sea and a buffoon on land, thus establishing a perfect set up for almost every occasion since his best friend, Maturin, was exactly the opposite. Novik has no such dichotomy for Laurence and, as such, we’re now left with a man stuck in the middle and an author who doesn’t seem to know what to do with him aside from send him to where she had her last adventure holiday. And this makes a poor protagonist to root for.

All of which makes Crucible of Gold a terribly disappointing book. Having read her prior work, we know that Novik is a talented and creative writer but, somewhere along the way, she seems to have gotten herself stuck into an area of the story she doesn’t know how to get out of. And perhaps the most depressing thing of all is that, as genre readers tend to be extremely loyal to the series they get into, she will continue selling books that muddle along rather than actually work out a solution to get the series back on track.

I loved the first three books of the series and still recommend them to anyone who likes tall ships or dragons or both. But both the language and the plot have gone so far off the rails, I’m worried about doing so any longer lest my friends curse me as they reach what it’s become.