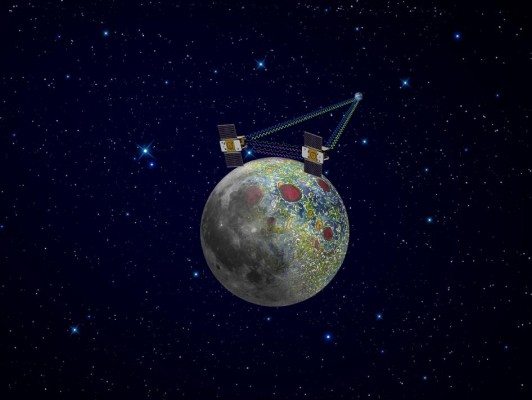 The Backside of the Moon

Chalk this one up as a NASA project that gives me a big case of the “ehhhh’s”.

NASA launched a pair of probes to fly around the moon to map its gravity changes from things like mountains and whatever’s inside the thing.

From the mission overview:

The GRAIL mission will place two spacecraft into the same orbit around the Moon. As they fly over areas of greater and lesser gravity, caused both by visible features such as mountains and craters and by masses hidden beneath the lunar surface, they will move slightly toward and away from each other. An instrument aboard each spacecraft will measure the changes in their relative velocity very precisely, and scientists will translate this information into a high-resolution map of the Moon’s gravitational field.

This gravity-measuring technique is essentially the same as that of the Gravity Recovery And Climate Experiment (GRACE), which has been mapping Earth’s gravity since 2002.

I don’t usually knock any area of science and human curiosity but can someone explain to me how this is at all useful? I mean, are we going to use the information gleaned to slingshot other craft around the moon for greater speed? Does the localized gravitational fields have some effect on Earth that we’re not aware of?

The high-resolution map of the moon’s gravitational field, especially when combined with a comparable resolution topographical field map, will enable scientists to deduce the moon’s interior structure and composition and to gain insights into its thermal evolution — that is, the history of the moon’s heating and cooling, which opens the door to understanding its origin and development. Accurate knowledge of the moon’s gravity will also be an invaluable navigational aid for future lunar spacecraft. Finally, GRAIL will also help us understand the broader evolutionary histories of the other rocky planets in the inner solar system: Mercury, Venus, Earth and Mars. Indeed, the moon is a linchpin for understanding how the terrestrial planets evolved.

Okay, so we might learn something about how the moon formed. And that might teach us about other planets. Maybe. And, if we ever want to land something there again, hey, we’ve got a Thomas Guide. All that, for the price tag of almost US$500 million.

Almost a bargin compared to some other things NASA has done.

I’m sorry, but the moon is perhaps one of the least interesting things out there that we can study. Can’t we learn about how planets formed by studying… oh, I don’t know… Mercury, Venus, Earth, and Mars? Actual planetary bodies? And wouldn’t learning how to get to those better be of longer term benefit to us?

What GRAIL has returned to us so far is a video from the backside of the moon. Note that I didn’t say “dark side”? ‘Cause there is no dark side. Just a backside only some Apollo astronauts have previously seen. Check out the short video below:

This video was taken by the GRAIL-A spacecraft now known as “Ebb” thanks to a Montana middle school student. It’s partner, GRAIL-B? Yep, it’s called “Flow”. Actually, that’s pretty clever. The cameras on Ebb and Flow (I’m tempted to just call it “Flo”…) are called MoonKAM, one of those awful government acronyms that supposedly means “Moon Knowledge Acquired by Middle school students”.

So anyway, apparently MoonKAM was put there as part of a public “outreach” campaign. A stunt basically. Because doing public outreach with a bunch of gravitational charts would have elicited the same yawns I started this post with but pictures of the backside of the moon? Neat-o!