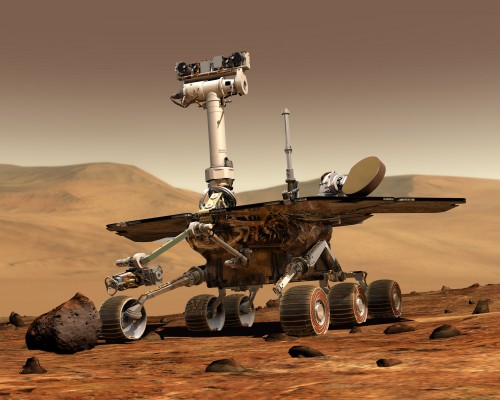 The Little Rovers That Could

Yesterday, I wrote about a NASA mission that was probably one of the most boring I’ve ever heard of. Today, I wanted to write about one of the best: The Mars rovers Spirit and Opportunity.

Did you forget they were still up there? It wouldn’t be hard, rover Opportunity has now been going for eight straight years. Mind you, they were intended for a total mission lifetime of three months. Three months! And people say we don’t build anything that lasts in this country any more.

Back in 2004, two rovers were launched from Cape Canaveral. The successors to the Mars Pathfinder mission of 1996. As NASA seems to like to do, they awarded naming rights to some elementary school kids who chose the appropriately government “inspiring” sounding names of “Spirit” and “Opportunity”…. I swear, I’d pay real money if they let metal bands name the next mission.

Needless to say, NASA figured out the whole English-to-metric thing this time around and the rovers literally bounced onto the surface of Mars, swaddled in a landing vehicle padded with airbags on the outside to do just that and began their three month missions on different parts of the red planet.

Spirit lasted over six years and traveled 4.8 miles in that time. She also returned over 124 thousand images of Mars to study. But what did she discover? From the press release announcing her “death”:

This is a rover that faced continuous challenges and had to fight for every discovery. Nothing came easy for Spirit. When she landed, she had the Sol 18 flash memory anomaly that threatened her survival. Scientifically, Mars threw a curveball. What was to be a site for lakebed sediments at Gusev, turned out to be a plain of volcanic material as far as the rover eye could see. So Spirit dashed across the plains in an attempt to reach the distant Columbia Hills, believed to be more ancient than the plains.

Exceeding her prime mission duration and odometry, Spirit scrambled up the Columbia Hills, performing Martian mountaineering, something she was never designed to do. There Spirit found her first evidence of water-altered rocks, and later, carbonates.

Spirit has climbed mountains, survived rover-killing dust storms, rode out three cold, dark winters and made some of the most spectacular discoveries on Mars. She has told us that Mars was once like Earth. There was water and hot springs, the conditions that could have supported life. She has given us a foundation to further explore the Red Planet and to understand ourselves and our place in the universe.

Carbonates? Like what Han Solo was incased in? (I joke…)

Finally on March 22nd, 2010, covered in dust, she essentially died in her sleep, failing to reply to commands sent from JPL. I know Spirit was just a machine, sent to Mars with the expectation she would eventually shut down, but it’s still kind of… well… sad.

Still, Opportunity is alive and kicking. Remember how Spirit did 4.8 miles during her entire lifetime? Opportunity did that just last year for a total of 21.4 miles. She’s arrived at her third crater, named Endeavour, after having passed Eagle and Victoria craters already.

And what she’s found there:

The “Cape York” segment of Endeavour’s rim, where Opportunity has been working since August 2011, has already validated the choice of Endeavour as a long-term goal. “It’s like starting a new mission, and we hit pay dirt right out of the gate,” Callas said.

The first outcrop that Opportunity examined on Cape York differs from any the rover had seen previously. Its high zinc content suggests effects of water. Weeks later, at the edge of Cape York, a bright mineral vein identified as hydrated calcium sulfate provided what the mission’s principal investigator, Steve Squyres of Cornell University, Ithaca, N.Y., calls “the clearest evidence for liquid water on Mars that we have found in our eight years on the planet.”

Now that’s science! Mind you, the total cost of launching the rovers was US$800 million back in 2003. I’m sure the mission extensions has added a little but not a lot to that cost. Compare that to the NASA GRAIL mission I wrote about yesterday which cost US$500 million and only went to the moon.

That’s what I call bang for our buck.

If you want to see the NASA video about the eight years of the Mars rovers and what’s next for Opportunity, check this out:

And don’t forget. The Mars Science Laboratory named “Curiosity” is on its way there right now. So we’ll have lots more Mars goodness to look forward to.

Provided below is a nice little photo gallery of artistic renditions of the Mars rovers. Thank you NASA. 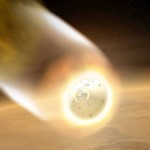 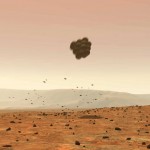 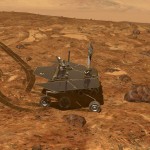 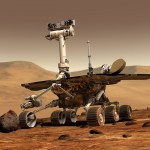 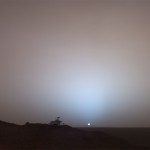 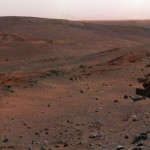