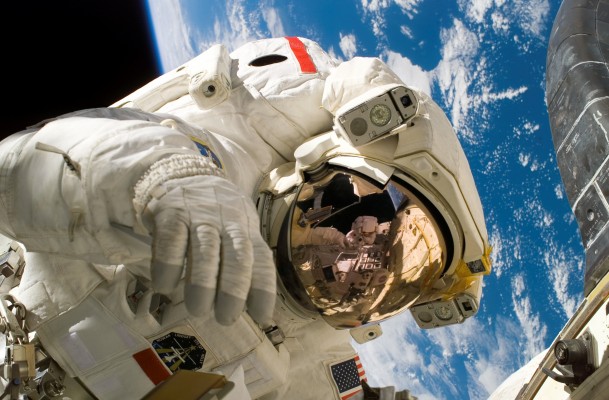 The Future of the Spacesuit

Here’s something that doesn’t get as much discussion as it probably should. With almost everyone agreed that Mars is the next stop for human exploration, what will the space suit of the future look like?

Right now, the NASA Extravehicular Mobility Unit, or EMU, as they call it is a pretty bulky piece of equipment. According to an interesting article I found on some new suits being developed, they are:

Conventional EVA spacesuits, so-called full-pressure suits, enclose the body in an oxygenated environment that not only enables astronauts to draw breath but also encases them in a layer of pressurized, temperature-controlled air that guards against exposure to vacuum decompression and extreme temperatures.

A drawback of pressurized ‘gas-bag’ suits, however, is their physical resistance to movement, which tends to tire out wearers during prolonged excursions outside. If today’s spacesuits were pressurized to Earth’s atmospheric pressure, they would be so stiff as to be all but immobile. Hence, lower pressures are used.

There’s a reason why astronauts train in these suckers under water. The first spacewalk was almost a disaster because no one knew how to move in space and the sweat from exertion fogged the helmet so badly it was almost impossible to see.

The history of the space suit is also a pretty interesting one. The first one was developed for the Mercury missions based on the pressure suits worn by high altitude pilots. Those, in turn, were based on deep sea diving rigs. It’d probably be a short episode but I wish James Burke would new a new Connections on space suits. I bet he’d dig up some really cool facts. 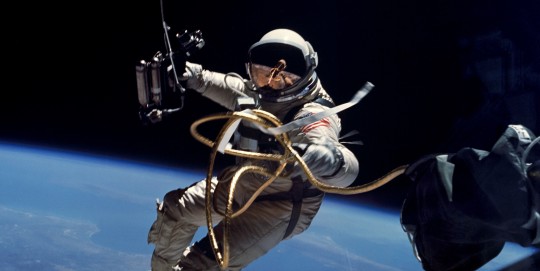 The article goes on to talk about a researcher by the name of Dava Newman at MIT who’s doing some really interesting work on something they call the “BioSuit” (I’d show a photo but they’re pretty strict about it):

Their patented BioSuit is a mechanical counterpressure, or “squeeze,” suit that would supply pressurized oxygen to the helmet but would otherwise employ tight bands to squeeze the body at certain points to counteract the dearth of external pressure.

The custom-fitted BioSuit, which is designed to enhance locomotion during spacewalks or planetary exploration, is made of a stretchy fabric that is composed of spandex, nylon and an unspecified plastic material to replace compressed air, making it more lightweight and maneuverable. Micrometeorite and additional thermal protection would be provided by an outer shell or garment.

“So far we have proven the technical feasibility of the BioSuit,” she reports, adding, “we would need another three to five years of funding to produce a flight-worthy system.”

Newman and her colleagues have also developed a similar stretchy suit design that is intended to counter the ravages of low gravity to the body’s muscles and skeleton. The gravity-loading countermeasure skinsuit would employ mechanical strain from a specialized elastic mesh to produce loading on the body to mimic the gravitational effects of standing and—when integrated with other counter-measures—exercising on Earth, she says. The conceptual suit design would impose simulated weight-bearing loading by gradually increasing tension in the vertical-axis fibers, along with the application of minor tension circumferentially to prevent suit slippage.

It’s certainly a more novel approach than the one NASA is currently looking at. See the image below. 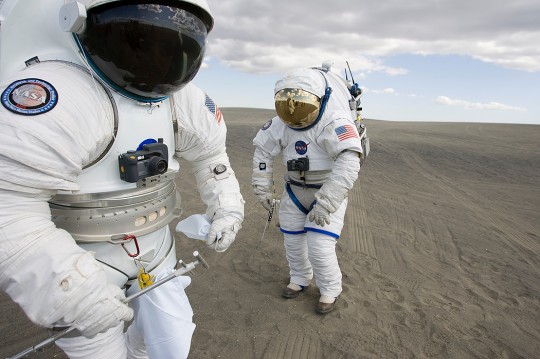 It’s definitely something that I think doesn’t get addressed much in science-fiction, what the space suit of the future will look like. I know that I’ve never really dealt with it in the Unified Republic of Stars mostly because, on the face of it, it sounds like such a pedestrian question. I mean, if people can build ships that travel between distant stars, surly they’ve worked out the whole space suit thing, right?

But it’s really something totally different, when you get down to thinking about it. We’ve been building ships forever and submarines for a good long time now, my preferred metaphor for space vessels. And, while we’ve also had deep sea diving around for a while now, the problem of pressure in space is exactly the opposite diving suits have to answer.

It’s something I may have to take a more considered look at in the future.

Anyway, if you didn’t click through to the BioSuit page linked above, be sure to do so. The amount of detail work done on something that looks to fit like a wet suit is pretty amazing and it’s clear producing them will be anything but cheap.