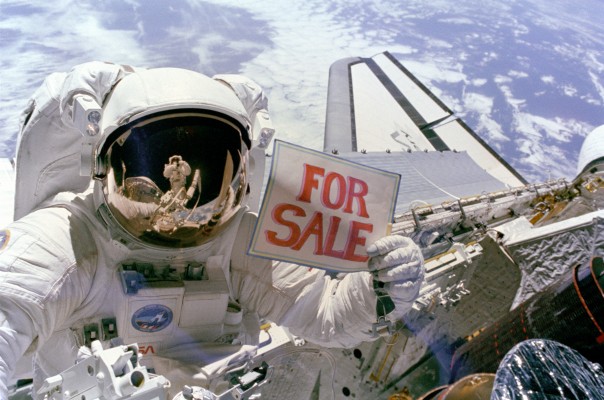 So Real You’d Swear They Were Fake

Been watching a couple of videos available around the internet lately. Basically, they’re so amazing that part of me wants to reject that they’re even real. 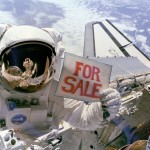 Like the photo to right, taken of Astronaut Dale Gardner back in 1984 on his second EVA to recover two satellites that were malfunctioning. Yes, a guy in space brought a “For Sale” sign along with him on the launch and posed for a silly picture. (Let us hope there are many more in the future. And taken by every day Joe’s, too.)

But as far as real unbelievability, check out the video below showing the Milky Way in time lapse from a valley in Chile carved with ancient petroglyphs.

Watching all those stars, as someone who’s lived in a city for the last thirteen years and grew up with the light pollution of suburbia before that, it’s almost unbelievable how many stars are actually in the sky. And it’s not just a trick of photography exposure. If you watch until the end, you can see where the exposure time is increased and those stars begin streaking across the sky.

Next up on our little film festival of the amazing, watch this view of the launch from STS-133, the final flight of the space shuttle Discovery. The really interesting bit starts at 2:20 but the whole thing deserves a look.

If you didn’t watch the whole thing, check back at 7:60 where you can see the entire shuttle rock, or “twang” as NASA calls it” about two meters at main engine start. If you look carefully, you can also see the shuttle experience Max Q, the aerodynamic forces reach their maximum on the shuttle and air literally breaks around it.

Mind blowing. But not nearly as much around 10:10 mark during SRB separation. Watching that shuttle veer away, again, the mind reels against it. It’s as real as anything can be, far more so than, say, the some CGI in Battlestar and yet, it’s somehow way harder to accept.

Naturally, there are some people who will say that’s because they’re fake but… whatever…

I don’t know what it is about these things that strike me as “unreal”, maybe it’s the lack of sound, which I guess there would be in space and all that. I wish I knew the answer. Is it because humans are savannah creatures and this kind of stuff is just to foreign to compute?

I’d love to know how NASA deals with this kind of thing. Or maybe I’m just the only one who feels it. I doubt it.