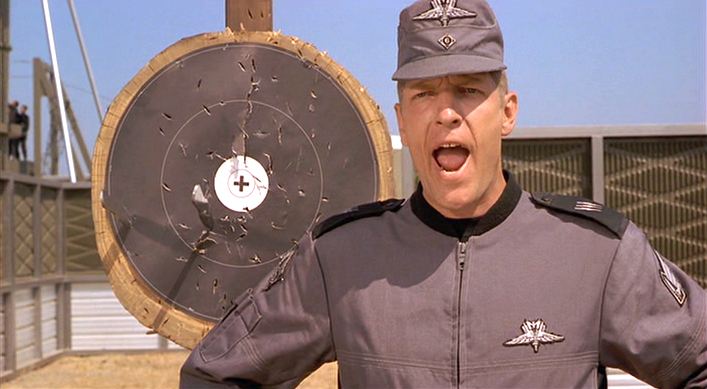 Probably a little late to be writing a kind of review about the movie Starship Troopers. After all, I was just out of high school when it came out and I’m… in my thirties now. Still… given that it’s a sci-fi world and this is a sci-fi world, well, hell…

As one does when one is drinking whiskey and posting on Facebook, I posted that “While Starship Troopers has, oh so, many problems, I like it a little bit more every time I watch it.” Almost a damn tweet, or twit, or whatever. And it’s true. I hated the movie when I saw it in the theater. Occasional re-watchings, however, have since endeared the movie to me. But I thought it might be worth going over what I see wrong with it as a “storyworld” just for the hell of it.

I’m just going to assume everyone who’s reading this has seen the movie because… it’s been out forever.

This is perhaps my biggest issue with the movie. There’s some sort of selection process that happens on the day you sign up for military service. Some kind of exam, background check, IQ test, whatever. Johnny Rico gets sent to the Mobile Infantry while his girlfriend “Ibanez” gets sent to pilot training.

Fine, fine, that all happens in the US military, it’s called an MOS, or, Military Occupational Service.

But what’s bizarre is that within the first five minutes of Rico being in basic, he sees one dude get his arm broken and then “Dizzy”, the girl who has the hots for him, is then choked out like a second later. The next day, another dude has a knife put through his hand. And, by the way, all this damage was personally caused by the Kurgan himself, Clancy Brown, the drill instructor. 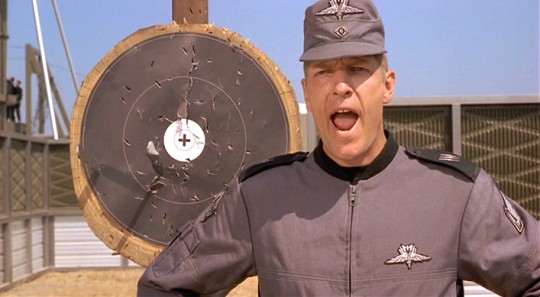 When the Kurgan orders you to do something, you do it.

Meanwhile, back at band camp, Ibanez is having the time of her life. Apparently, as a pilot cadet, she has free use of military space shuttles and can race her roommate for the pleasure of flying one to her duty assignment. Then, once aboard ship for flight training, she’s allowed to basically endanger the ship by almost crashing it into the station with only a warning that if she does it again, her instructor might lose his license to fly also.

Really? That’s like the DMV telling you at your driver’s test that if you don’t drive right, the tester won’t be able to drive either. Where’s the fucking incentive to do wrong there? In fact, doesn’t it incentivize exactly the wrong way?

Of course, none of that matters because it’s really just a set up for her to find romance with said instructor while Rico takes ten lashes with a bullwhip to the back.

Now, maybe someone who’s actually served can tell me different but I’m thinking that while the Army may try and drill some extra caution into you during basic training because the Army tends to be in the thick of it, I doubt the Navy treats its recruits like everyday is a beach day. And while someone who’s trained to fly a plane or drive a boat might be given the benefit of the doubt once in a while (because, fuck, it’s hard to find good ones much less train them) I also don’t think they can just jet off or drive the boat in whatever direction they want to. 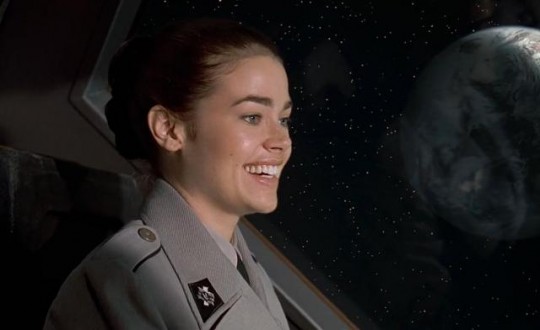 Look! The military is fun!

Which brings me to another thought about the “navy” in Starship Troopers.

It’s a massive ship and yet the bridge crew consists of three people, the captain, who panics at the first sight of trouble and repeatedly leaves the formation in the middle of battle operations, her first officer and her second officer, both of whom are clearly fucking.

I get it. Men and women, it’s what happens. But in the military it’s called fraternization. And it’s not just looked down on. It’s penalized because it runs the risk of breaking unit cohesion. I mean, it’s bad enough that Rico and Dizzy are getting it on in a warzone but shipboard where it looks like 90210? God forbid something were to happen and they broke up. What would that do to the chain of command?

Of course, that’s not nearly as bad as the lack of innovation among the military when fighting their enemy. A subject I like to call…

They say that the military is always fighting the last war. And you can see that throughout history. America was trying to fight WWII in Vietnam, France WWI in WWII, etc, etc. It’s not until the next war that you adapt, truly, to the tactics you saw in the last one.

But, Christ, Jesus, in Starship Troopers you have a hundred guys (and girls) standing around shooting automatic weapons at the same damn creature and barely taking it out as is.

Sure, they have “nuke” tipped RPGs. And they blow the hell out of the caverns they shoot them into (though apparently the explosion can be outpaced by someone running fast enough). But, otherwise, their weapons really aren’t too different from what a soldier is equipped with today.

Even before the attack on Buenos Aries that leads them to make an attack on the “bug” homeworld, both species were clearly at war with one another. Humans were dissecting bugs in biology class. They were clearly aware of one another and the threat they both posed. So why were they armed with relatively small caliber ammunition that took four hundred rounds to put down a single enemy. 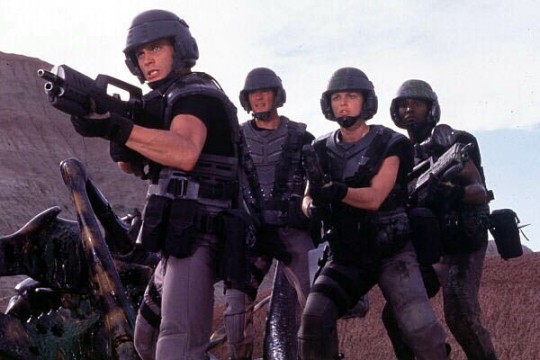 Okay! You hundred guys go to that side, us hundred will be here. Together we'll take out this one bug!

One would think that in the amount of time humans had to capture and study the “bugs” that were the enemy, we might have devised something a little bit more powerful than a new variation on the automatic weapon. What about explosive tips? Gun fired sabot rounds? Fucking robots to fight the war for them?

Where was human ingenuity?

The military leaders on Earth who are still celebrated, regardless of what side they were on, were the ones who not only adapted to their enemies tactics but innovated new ones that no one saw coming. And while the movie did have one “Sky Marshal” step down for his failure, I wonder if he shouldn’t have been executed for plain dereliction of duty.

If it takes fifty of your guys to take down one of theirs, then your guys clearly need something to even the advantage. And since the bugs can’t innovate, just evolve, then… fuck! You’ve got a million year advantage on them. Build better guns!

But that’s not as bad as my final point, perhaps the most interesting point, a point many call…

Remember in the movie, that ship that “Ibanez” was driving and almost crashed into the wall?

Assuming its cost is anything like the cost of an aircraft carrier in the United States, let’s be generous and assume that it was somewhere near the future equivalent of US$4 billion dollars. Probably more because, hey, things for space inflate costs. But still, a capital project, no one will doubt.

In the movie, it’s easy to guess that there were probably anywhere between twenty and thirty of them shown at any one time. Also assuming that a fair number stay home to protect, it would be easy to guess that there’s a fleet of around at least sixty (including those down for maintenance and retrofitting). That means, the fleet, just at this guess is around US$240 billion dollars in todays money just to build in the first place, forget upkeep and crew.

But speaking of that crew, again using the carrier metaphor, let’s run with the modern US Nimitz class carrier as an example. It has a compliment of 3,200 people just to run the ship and another 2,480 according to Wikipedia for the airwing. Assuming a lowball figure of $30k a year per crew member, that alone is US$74 million a year. And that’s for one.

Basic boring math, you might say. But as anyone who’s read Freakanomics knows, here’s where it gets interesting.

The bugs don’t pay a thing.

They breed like they’re rabbits, and while some of the larger bugs might require more resources to procreate and feed, they don’t cost anything above that.

Why is that interesting?

Because as long as they have those resources, there’s no end to the war materials they can produce. They can literally out-breed and out-fight the relatively slow reproductive rates of humans and the slow production process of its war machine. They don’t need to unite against a cause. They are monolithic as a species.

This is interesting because we are not. 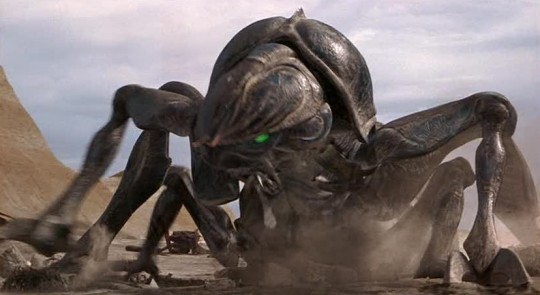 Humans have disagreements. Humans want to be rewarded for our work. Hence the cost of everything we build. Hence the time and money it takes to build it all.

When it gets right down to it, the “bugs” have the advantage. If their “brain bugs” were really smart, they’d bog down humans until all the capital ships were destroyed or in repair, the citizenry of Earth was up in arms about the number of deaths, and then launch their attack. With their reproductive rate, they’d outpace us in less than a generation.

And that’s what’s interesting and the biggest thing the movie missed as a motivation.

Sure, some strange species hurling rocks poses a threat to Earth. That’s bad. But what about being overrun? Can humanity unite against such a threat? Would we? Who would take advantage of such a situation for their own benefit? And, would they get away with it?

I haven’t read the book the movie was based on and maybe it goes into all of this. But as someone who’s seen the movie a half dozen times, these questions bother me. Even in a world where the vetrans have taken over because they know “better”, there’s still nothing stopping someone who served the bare minimum of service to qualify as a citizen from exploiting it all to his or her advantage.

It’s an old movie at this point. But I still think many of these things are worth discussing.