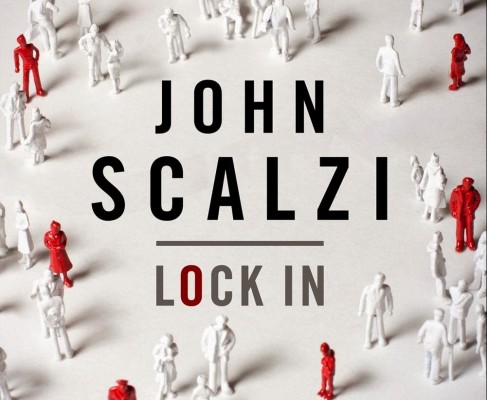 So… book number two that I read over my Christmas holiday was Lock In by John Scalzi. I picked it up because I read Scalzi’s best known works (I think), The Old Man’s War trilogy. They were good books with an interesting twist that really made the story world an interesting and vital place to explore. And anything that can maintain my interest over three books is something that’s good.

But, if I had one problem with his books previously, it was that the main characters of those books seemed to always discover some way to manipulate a (longstanding) existing technology and do something no one had ever conceived of before! The first time, okay. Hey, I’d never been in the world before, maybe it was possible. But, by the third book, how many innovations can be made with something that has existed for a while? I mean, I thought I was the first person to try donuts in a car but I’m sure that every sixteen year old going all the way back to the first horseless buggy probably felt the same thing.

So I’ll admit that I was curious to see whether this would continue with his new novel, Lock In. For those who don’t know the premise, here’s the back of the book:

Not too long from today, a new, highly contagious virus makes its way across the globe. Most who get sick experience nothing worse than flu, fever and headaches. But for the unlucky one percent – and nearly five million souls in the United States alone – the disease causes “Lock In”: Victims fully awake and aware, but unable to move or respond to stimulus. The disease affects young, old, rich, poor, people of every color and creed. The world changes to meet the challenge.

A quarter of a century later, in a world shaped by what’s now known as “Haden’s syndrome,” rookie FBI agent Chris Shane is paired with veteran agent Leslie Vann. The two of them are assigned what appears to be a Haden-related murder at the Watergate Hotel, with a suspect who is an “integrator” – someone who can let the locked in borrow their bodies for a time. If the Integrator was carrying a Haden client, then naming the suspect for the murder becomes that much more complicated.

But “complicated” doesn’t begin to describe it. As Shane and Vann began to unravel the threads of the murder, it becomes clear that the real mystery – and the real crime – is bigger than anyone could have imagined. The world of the locked in is changing, and with the change comes opportunities that the ambitious will seize at any cost. The investigation that began as a murder case takes Shane and Vann from the halls of corporate power to the virtual spaces of the locked in, and to the very heart of an emerging, surprising new human culture. It’s nothing you could have expected.

What this description doesn’t say is that Haden’s, in a lot of ways, is an analogue to Deaf culture within the United States. Namely, that the technology that’s been invented has allowed Haden’s “victims” to integrate fully into society but, between when the disease struck and when the technology became mainstream, a culture of adaptation and insularity had formed, and in this culture, some of the “victims” weren’t so sure they even wanted to integrate.

Think of these technologies for Haden’s as the cochlear implant to the deaf community. I’m not personally involved in this but I’ve read about some of the pushback against the implants because of it’s supposedly destructive influence on deaf culture. What’s the need for ASL, deaf colleges, and all the rest if they’re “fixed” by technology and integrated into the rest of society?

It’s actually a really interesting thing, turning what mainstream society sees as a disability into a thriving an active culture. And I wish I knew more about it. But, even knowing what I do, I found the parallels between Haden’s and deaf culture to be fascinating. (Hence the reason I kept air-quoting the word victim.)

But I also found that Scalzi’s political perceptions were spot on. Haden’s became a thing because it struck the First Lady (last name, Haden), and Congress, seeing one of their own struck down, rushed through an emergency package of funding, Apollo style, in a way it never did for AIDS or even cancer. But, one day, even that gravy train has to end, and that’s where this book begins.

The society of Haden’s “sufferers” saw the end of the massive amount of federal funding that had made their lives, in anyway they chose to live it, possible. Protests are planned for DC by the Haden’s to object to the funding cuts. “Normals” are tired of the special privileges they feel Haden’s have been getting. And, then, a murder occurs.

It’s fishy. There’s something not right. And this is where the book jumps off.

I won’t go into the actual mystery because, you know, spoilers. But, over all, it holds together as a mystery, over and above a science-fiction story, a tough act to pull off, crossing two very distinct genres. And, when it resolves, it’s all consistent within the world. Sure, someone comes up with a trick, one that hasn’t been used before but it’s not as egregious as the previous novels. In fact, the trick is a bug. And the solution isn’t some kind of high tech wizardry. It’s actually very human.

If I have one issue with the book, and it’s a nitpick, it’s that it seems to be written to be very conscious of race and seemed to follow the path that authors concerned about playing into stereotypes just by announcing that a character is “Asian” or “African American” often tread. I bring this up because the main character’s father has a backstory, describing him as a basketball hero who went on to become a business success and was thinking about running for office.

Not a problem. You know. Black, white, whatever. Maybe race doesn’t matter…

Except that it’s clear that it does when the father shoots a home invader and everyone acknowledges that his political career is now stillborn because of the image of a black man holding a shotgun. It’s the first mention of his race through the entire book and, aside from the characters that are identified as Navajo, the only explicit mention of race I can remember.

Now, I don’t care what race anyone is. It’s the 21st century. Anyone can be anything as far as I’m concerned. But you’re telling me a story. You’re supposed to paint a picture in my head. I don’t care that the main character’s father is black except that I never had a clear image in my head of what the guy looked like. And being black, while not important to his personality or capabilities, is part of what he looks like.

To understand what I’m saying here, imagine just describing to someone in the most creative way you can think of how Morgan Freeman looks while leaving out the fact that he’s black. Will anyone really have an accurate or detailed image of the man in their heads? I don’t think so.

Like I said, a bit of a nitpick but it bugged me nonetheless.

Still, I enjoy Scalzi’s writing and his fast paced stories. I breezed through this book pretty quickly and have been thinking about it since. It’s definitely a book worth picking up.