So here’s how obsessed I am about the game. The gallery below? I just spent thirty minutes selecting the right images, uploading them, adding descriptions, thinking of titles, and then altering the way the WordPress media page would display them. Because I want people to really see how awesome this game is.

Seriously! I’m really not messing around. This game has become my obsession! (And it’s seriously eating into my podcasting time…)

If it’s not immediately clear why by looking at the banner image then, fine, I’ll spell it out. You get to shoot rockets into space! And that’s really not even the half of it.

The game is called Kerbal Space Program and that’s really what it is. A full fledged space program where they provide the components but you build the ships and then try to get them into space and do something with them. What? Well… whatever you want, really.

But the really interesting thing is finding out how things that used to seem so complicated and impossible are suddenly easy and happen almost without you even thinking about them any more. To give an example… for the first week I had the game (and, mind you, I wasn’t playing constantly, I’ve got a job and girlfriend and podcast) just achieving a stable orbit from a ground launch seemed nigh impossible. I just couldn’t get the orbit to go all the way around.

Putting things in orbit is the easy part. I fire my rocket, drop the nose to 45-degrees at 8 kilometers, bring my apoapsis (the highest point in an orbit) up to 75 kilometers (outside the 70km atmosphere), and kill my thrust, letting my ship basically float up from there on. When I’m about twenty seconds away from my apoapsis, I turn the ship to just about five-degrees over the horizon and fire on full until I raise my periapsis to 75km and, you know what? Orbit achieved. I’ll now float around the planet Kerbin forever.

But that’s just the start. Kerbin has two moons. And the Kerbol system has six other planets. And most of them have moons. And, yeah, they can all be explored.

I’ll admit, I haven’t gotten very far yet. I’ve landed on both of Kerbins’ moons, Mun and Minmus. But I haven’t gotten further than that. And I still haven’t gotten a rover onto either. I’ll admit that I’m struggling with heavy rocketry. It doesn’t exactly scale in a linear way. Nor have I mastered the arcane art of rendezvous where you get two ships in orbit to meet up and dock with one another. But, once I do, I’ll be able to build ships in orbit. And, with enough fuel… send them anywhere. 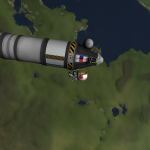 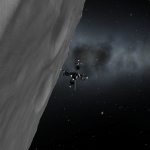 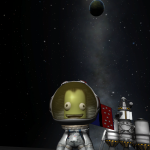 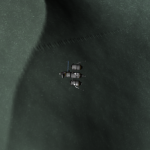 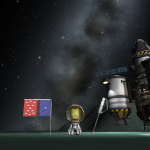 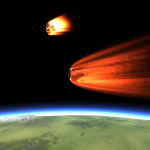 Perhaps the most interesting thing about the game is that it really allows the player to do whatever it is they want to. Sure, there’s a career mode but I’ve found it a little too frustrating. But it has two other modes, a full fledged sandbox where you get access to all the technology and nothing costs anything and a science mode, where nothing costs anything but you have to collect science in order to unlock the tech tree.

Personally, I prefer the science mode. First, the tech tree seems to unlock right around the time I need to use that part for my next wacky idea. And, secondly, it gives me a reason to go places. I’ve built a ship model I call the Science IIb that’s loaded with scientific tools that I can pretty much take anywhere around Kerbal or its moons and collect all kinds of data. And this data goes toward unlocking additional parts which keeps me collecting data. And, once I’ve unlocked all the parts… well… collecting the data just gives me a reason to go new places.

If I have one gripe with the game, and really, this is so minor… it’s that there’s not a lot out there. Sure, there are some Easter Eggs on some of the planets and on the Mun. But, aside from going out and planting flags, there’s nothing out there. And I’m not asking for space combat or planetary combat with alien creatures, mind you. But just like they procedurally create graphic rocks that have no effect on your landing, it would be interesting if they might do the same thing for at least one or two of the planets that have atmospheres. You know… just so you’ve got something you can watch and think, “Wow… I’ve encountered another creature!”

Even the planet Kerbin is bare. There’s literally a space center and nothing else. Again, I’m not asking the game to become Sim City or something it’s not, especially if it takes away from the space flight aspect of the game, but some kind of procedurally generated towns or villages dotting the landscape would give early players (who can’t quite stay in orbit yet) something else to see on the planet. Or… short of that, trees and bushes.

I guess what I’m saying is that, so long as you’re motivated by your own accomplishments or just knowing that now you can do something, there’s a ton to do in the game. Build that space station to dwarf the ISS. Construct an entire Mun base. Go to Duna, Jool, or Eve! But, once you’ve been there… there’s just not a lot else to do.

Mind you, the game just entered beta. It’s an early access game. And I’ve personally seen two iterations and am blown away by the progress they make on each one. So… by the time it reaches 1.0, who knows what else might get added. I just brought up that one issue for players who might download it and then ask, “Now what?”

Seriously, though, I don’t think I’ve ever learned so much about the actual mechanics of space flight as I have while playing this game. And I’ve been into NASA and space and all that stuff for years. So it’s really great to get my hands on a sandbox that will let me try my hand at setting up an Apollo program.

I really don’t think I can recommend this game enough.