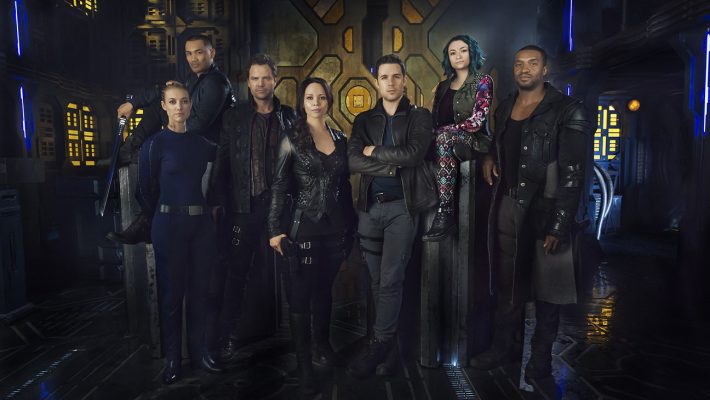 Stop me if you’ve heard this one: A group of people, bound together for some reason on a space ship, fly through the galaxy sometimes solving other people’s problems but usually just creating more of their own…

It could be the log line for at least a half-dozen shows that come to mind. Farscape? Firefly? To name two…

Of course, both of those were great shows, so why not recycle the same concept and take yet another whack at it?

And… yeah… why not? Because it’s a formula that works, honestly. And in Dark Matter, it works again.

The specifics for shows like this are always different. Farscape was about a human who landed on a ship of escaped prisoners, desperate to get away from their captors. Firefly was about a group of smugglers, trying to stay one step ahead of the government and civilization.

Dark Matter is about a group of people who wake up aboard a ship with no memories. Nothing, nadda, zip. They don’t know their names, how they got there, why they could’ve been there in the first place. They don’t even know the name of the ship. They’re just there. Together. And they have to figure out why.

Honestly, the first episode of the show is rough. Really rough. When characters don’t have names or histories you have to do the obvious, make each one of them represent a trope. Because there’s literally nothing else to go on with them. So you have the Take Charge Bossy Lady, the Dude Who Packs Large Guns, Mr. Almost Too Sensetive To Be A Criminal, Mr. Let’s Stop And Be Reasonable, Kung Fu Fighter, Spunky Teenager, and an android that looks totally human of course.

It’s like a writer’s exercise. Use well known character tropes, put them in a room together, and, boom, instant conflict. Mr. Sensetive and Gun Guy of course don’t like one another. But Gun Guy falls in behind Bossy Lady because, despite all his talk, he’s more of a take orders kinda guy than come up with the plan sort. Spunky falls in with Mr. Reasonable because he seems kind. Kung Fu wants nothing to do with anyone. And the android is honestly the best I’ve seen since The Next Generation’s Data. An almost monotone delivery and a wide eyed kind of innocence all over her face but you can tell there’s more going on behind the scenes.

And the first ep really does struggle because of it. Everyone is a little flat, a little too cliche. But… they work through it and even manage to land on a planet in a quest to figure out who they are and solve some people’s problems. See, everyone on that planet is dreading a visit from the Raza but no one knows who the Raza are except deadly, deadly killers. When you get a visit from the Raza, kiss your kids and your ass goodbye because that, my friends, is it.

But the Raza never show. Just a corporate SWAT Team sent to do the job the Raza never did. And the team of amnesiacs manage to kill a bunch before brokering a peace.

Problem solved, kick back with a beer. Except that when they get back on the ship, the android has been able to recover some of the ship’s data and, guess what? The name of the ship is the Raza.

Yeah, they were the people sent to kill everyone they could find on the planet.

Included with the ship’s name (you’d think there’d be ship stationary or something laying around with the name but… no…) were some very brief and disturbing bios on each of them. And they’re basically the killers everyone thought they were. Except for the kid. Her name remains unknown. And it’s assumed she’s probably not a killer, at least if her age is anything to go by.

But none of them feel like killers (well… except for Gun Guy) and they’re not exactly thrilled to find out any of this stuff. So they decide to set off… Make things right.

And, that, is basically the premise of the show. Except that is gets a lot more complicated from there. But the cast of actors are amazing. And once we start exploring the differences between who these characters were versus the way they see themselves, that’s when legitimate and interesting character conflict kicks in.

The show is totally worth it. I burned through all of the first season in a couple of nights and was thrilled to see that it’d been renewed for another season that is supposed to air this summer.

So… If you’re browsing through Netflix facing choice paralysis and want something new and fun to watch, go in for Dark Matter. You won’t regret it.