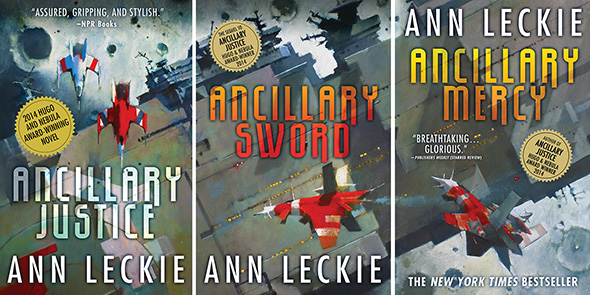 What do you do when there’s a civil war and no one knows about it or what side they’re on?

To some extent, that’s the central premise of the Imperial Radch Trilogy, made up of the three books Ancillary Justice, Ancillary Sword, and Ancillary Mercy.

Minor spoliers ahead, mostly for the first book.

The term refers to what the books call an ancillary, a former human being, slaved to the AI that controls the massive ships of the Radchaai military, the tip of the spear of the Radchaai Empire, a massive space empire controlled by Anaander Mianaai. The reason an ancillary is important is because the main character, Breq, is the last remaining ancillary of the troop carrier ship Justice of Toren, out for revenge against the person she holds responsible for her destruction.

What does it mean to be “human” or even just a “person”? What is civilization? Who is considered to be civilized? It asks the kind of questions epic scale sci-fi space opera should.

It’s a fascinating premise and a lot of the issues dealt with throughout the series are just as fascinating: What does it mean to be “human” or even just a “person”? What is civilization? Who is considered to be civilized? It asks the kind of questions epic scale sci-fi space opera should.

The problem is that sometimes these issues are lost in the rather small scale events the books actually cover and the sometimes dense and confusing style they’re is written in. And then, at other times, the books just beat you over the head.

To start with, the first book, easily the most interesting and perhaps the best of the series, revolves around two events, Breq as a lone ancillary out to score revenge for the destruction of “herself” intercut with the events that led up to the destruction of the Justice of Toren. The events leading up to the destruction are really interesting, giving some insight into Radch culture and how society is structured, right up to its leader the Lord of the Radch, Anaander Mianaai, giving hints as to the civil war raging within the Radch that no one seems to be entirely aware of up until Justice of Toren, and thus Breq, find themselves on the wrong side of.

The problem, we discover by the second book, is that there is no right side. The civil war is between Anaander Mianaai herself. (Radchaai society doesn’t recognize gender, so everyone is a “she”.) See, Anaander Mianaai may once have been a single person but, as the empire grew, so did she, with linked clones being created to help administer the conquored space. But an event three hundred years before the events of the first book caused a rift within Anaander Mianaai that had turned into a silent civil war everyone else didn’t know they were living through.

Until Breq comes along and brings it out into the open. Then one side of Mianaai sees Breq as a possible tool while the other hates her for exposing the conflict to outsiders. But neither realize that Breq doesn’t make a distinction. Anaander Mianaai is just simply a “the tyrant” in her eyes.

All very interesting stuff. And the first book was nearly impossible to put down. But, unfortunately, what worked in the first book, struggled in the second. As an ancillary, Breq was one part of a larger whole. And it was interesting to see how the author distinguished between various viewpoints it could see when telling the satory from Justice of Toren‘s point of view. Then when the story revolved around just Breq, because she was no longer a part of a larger whole, the storytelling narrowed so that it was only through her eyes.

But in the second novel, Breq is given command of a ship and she re-activates parts of her ancillary functioning to take advantage of seeing what the ship can see at any moment. Which, at times became utterly confusing and disjointed. Breq may be on the planet involved in one conversation while seeing and listening to a lieutenant on the station above involved in a second one while also seeing and listening to another lieutenant on the ship itself, without even going in a clear round-robin fashion.

I can see why the choice for this was made, to give the reader some indication of how and why Breq saw the world the way she did but it, at times, could be so disjointed and confusing it actually broke the narrative when I had to stop and ask myself, “Who’s the what, again?” Clearly, not all storytelling has to be linear, as the first book more than ably proved. But the second and third books seemed to take this convention and sometimes get lost in it.

Maybe, as consequence of this, was that the author seemed to repeat facts well established over and over again, in long bits of exposition between shorts burts of dialogue. And this created two problems, the first was frustration at receiving redundant information, yet again, and then trying to remember what the character had just been talking about when the dialogue resumed.

I could possibly see the need for this at the beginning of each new book, to establish facts for people who picked up the series after missing the first or second books. But I also see coming into this series without reading the ones before as unlikely. It’s less Alex Delaware and more A Song of Ice and Fire. I mean, I don’t think George R. R. Martin bothers to remind everyone about the players on the field each time. Still, if there were early reminders, there’s just no reason to keep reminding all the way through a book. I’ve got it. Anaander Mianaai is at war with herself. If I hadn’t gotten it the first ten times, another twenty-five wasn’t going to be the trick.

And this was perhaps my biggest issue with the series. The disjointed dialogue and scenes interspersed with information I likely already knew. Again and again and again. It made it difficult to wade through sometimes.

… though of course every world builder has subjects they prefer to focus on, I felt as though the author chose strange areas to shine a spotlight.

And, though of course every world builder has subjects they prefer to focus on, I felt as though the author chose strange areas to shine a spotlight. The Radchaai drink a lot of tea. They wear gloves. They’re more or less polytheistic. They have a military that doesn’t let soliders use their names but, instead, are referred to by their unit and numerical rank within it (“Amaat One”, “Bo Nine”). But that’s really about as much as I know about Radchaai culture.

The places that are visited, the ships that are flown, none of them feel very lived in. The author doesn’t spend a lot of time painting a picture of where her characters are. And, for a culture that is supposed to span perhaps hundreds of light years, I know little more about their shared culture other than tea is really important.

I know I’d like to buy the world a Coke but I doubt that’d really bring me and an Iraqi much closer together. And we’re on the same planet.

Over all, I liked the concepts that the books dealt with. I enjoyed the core conflict and I even liked some of the characters. But the books weren’t very enjoyable to read. Especially the second that just seemed to kind of put things on hold while the culture was supposedly explored. (Surprise! Given the importance of tea, the tea growers aren’t all super nice people!)