Now that I’ve had things installed for a little longer and have actually been able to put it through its paces a little bit more, I thought I’d do a quick followup on my prior review, to let you know how the iPad Pro 9.7″ functions as an actual development machine.

First off, I don’t think that anything I’m about to review here really has much to do with the feature set of the iPad Pro specifically aside from the fact that the iPad Pro has a Smart Connector and, thus, a keyboard case made by Apple whereas every other iPad requires a 3rd-party bluetooth keyboard. But for everything I will review, I have to say, you really do need an external keyboard. Yes, everything functions with the onscreen keyboard (it has to or Apple will reject your app) but it is so, so much more useable if you have an external keyboard to type on to use the full screen for display.

And, for anyone trying to use their iPad as a development machine, I’d think you’d already be thinking of a keyboard. So, for the purposes of this followup, I’m going to assume one is on hand.

That said, given that I got the 9.7″ (Baby) Pro, I wonder if I couldn’t have saved a few dollars and achieved the exact same result.

But, first, the apps being used. And, before even that, my philosphy when it came to app selection…

First of all, I should put this out there: I’m a professional iOS App developer. So I definitely have a dog in this fight. But, perhaps more importantly, I remember when you actually had to pay for software. And not a little. A lot.

Visual Studio used to cost over a grand. I’m not sure exactly how much but I remember after graduating high school, wanting to develop Windows programs and realizing that I couldn’t afford the tools.

Photoshop used to be over $800 for a single seat license.

Office, depending on the license and the included programs, could be over $1,000!

Windows itself was close to $500 for a single XP license.

And if you were a prior user of the just previous version, you were rewarded by paying only half as much again for the next, newer version.

In the age of free MacOS (I’m sticking with it!) and iOS updates, it seems strange to pay for something as simple as the program that would run your computer. And now Office and Photoshop can both be had for something like $10/month each. Upgrades and everything included.

Apps in the early days cost something. The expensive ones were $4.99. The more reasonable ones were $0.99-1.99. But, now, almost everything on the App Store you could want is free. So why pay for apps?

Because… Like anything, you pay for quality. Want a developer to put their time and energy (and possible billable hours) into developing a piece of software that makes your life easier? There has to be a motive for it. And it’s not just knowing that their app is ranked #104 in Utilities. It’s that they’re maybe able to buy their girlfriends or boyfriends flowers with the extra money they hopefully make. Or, if they’re really lucky, pay for a holiday somewhere. That’s always nice…

Unlike a lot of app developers, I offer my services on a contract basis and end up working on a lot of apps that were never designed to make money in the first place, I get paid either way.

But not everyone is so lucky. And I remember that software used to cost money. So I’m not against paying for quality software. So I did.

If you’re looking for a review of apps that do what these do but are free, there are more than a few. But none of them do what these do as well as they do it or will make your life as easy. 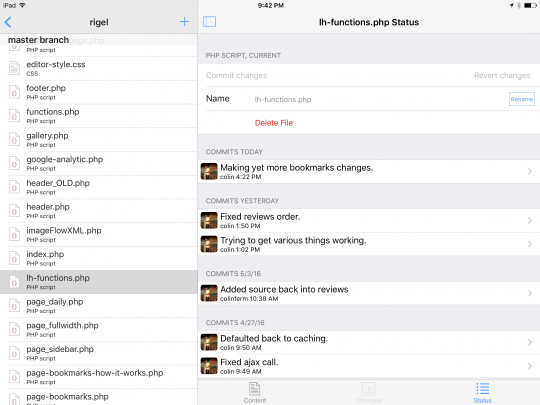 If you’re like me, then everything you work on is in one Git repo or another. And, hands down, the absolute best Git client I could find was Working Copy. And it is a solid client.

Like you would expect, it checks out the entire repo, allows you to switch branches (though I haven’t tried to actually branch with it yet) and, if you plunk down for the ability, to push any changes you’ve made back to the origin.

It’s the most expensive app on the list but it’s also taken the most complex thing all of these apps do and makes it simple ont the iPad.

But one thing it is not is a text editor. You can see the contents of a file but you can’t edit it. That’s where Texastic comes in…

Textastic in the main view with Working Copy in the split view.

I got this because I was reading about streamlined interoperability between Working Copy and a code editor and Textastic seemed to win on every front.

It’s not fancy. It’s really just a text editor. But it has syntax highlighting for almost everything I’ve put through it. And its integration with Working Copy is tops. I want to edit a file, I tell it to open a file, it asks me from where, I tell it from Working Copy, and from there I can browse the source tree to find what I want. Better yet, if I had selected a file in Working Copy before going to Textastic, it would ask me if I wanted to open that file right away, saving me perhaps dozens of touches.

Once the file is open, I make my changes. I can either close it or not. Doesn’t matter because the changes are written back to Working Copy, no questions asked. Which means, once back in Working Copy, all I have to do is commit and push.

If you’re working on a platform that auto-builds on push, then that’s all there is to it. You can then reload Safari to see the changes. I did that just this week on a Squarespace site I was helping to develop a custom theme for that needed a last minute addition.

I edited two custom page templates in Textastic and pushed them up with Working Copy, checked my work in Safari, and I was done. Total time, five minutes. While still in bed.

Textastic has a preview mode but, depending on the complexty of what’s being worked on, this is limited at best. If you’re working on an HTML email template with the style sheets and whatnot embedded, no problem. Same with Markdown. But anything that needs to be parsed by a compiler or intrepter will not display as it should.

Which, again, is fine for my purposes. All I really want is a text editor with syntax highlighting and line numbers so I can tell where I am.

If I needed something more complex, like something that could embed external stylesheets or try to better represent a more honst web environment, I might try Panic’s Coda. But I don’t. Which doesn’t mean Panic didn’t get any of my money.

Prompt next to Working Copy, so you can double check that what’s being fetched is what you pushed.

Checking files out, making changes, and pushing them back up is great and all, especially when there’s an app that auto-deploys on a push, but most of the projects I work on don’t do that. So, what do I do when I need to make a change in a production environment?

Panic’s Prompt 2 solved that half of things for me. It’s a fully featured SSH client that I can even import keys into so as to access password-less environments like EC2 instances. And, once you’re in… It’s just like any other shell.

As much as I love Working Copy and Textastic, it’s Prompt 2 that has me really blown away.

Even though they’re really just providing me a secure shell and letting the server do the rest, the fact that it feels as native as my Mac shell or any other *NIX shell is what makes it feel awesome. I can edit files with VI. I can run build scripts. I can stop and start system services.

Honestly, it’s having a fully functional shell that makes me feel like god.

Using just Prompt 2, I moved two hosts off their vhost onto my own EC2 instance all while listening to a podcast in the kitchen while roasting cauliflower and frying a steak. If you’re old school like me, a power shell is where it’s at and Prompt 2, after having tried a half-dozen other shells, is where it’s at.

And, for the privilege of feeling like a server god on my iPad, I paid $7.99.

For those not doing the math, that’s about $33 in apps spent to do what I wanted the iPad to do. When you really boil it down, why would you pay, with accessories, over $1,000 in equipment and tax and not spend an extra $33 to developers who actually make the device do what you want/need it to?

And, remmeber, a third of what you spend on apps also goes to Apple. So they have you coming and going… Meanwhile, the actual developers themselves get $22, divided among three different developers… For apps with a very limited appeal… Technically, in perpetuity…

Yeah, I feel just fine having paid for these apps. In fact, I wish they’d cost more because I know they’re barely able to eat out on the money my own personal math says they’re bringing in. And, you know what, it would still be more than worth it.

But, after considering the stellar app development, the truth is that the star of the show that I thought would be the iPad Pro is, in fact, not the hardware but the OS, namely iOS 9.

Because of the improvements made with two apps being able to share the screen at the same time that iOS 9 introduced, that’s where the real magic is happening whereas, when I saw and read what I had, I’d mistakenly assumed it was because of the “pro” hardware.

And that’s what brings me back around to where this catch up review began. Everything I’ve done with my iPad Pro was completely possible with an iPad Air except for the 1st-party keyboard. The apps used, the iOS 9 split view, everything.