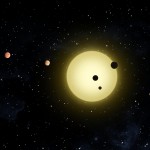 They're discovering all kinds of planets and shit!

Yesterday the news was all abuzz about the latest discovery of an exoplanet, found in the “Goldilocks zone” orbit area around its star where it’s neither too hot or too cold. And it’s called ever creatively, Kepler 22b.

This is pretty awesome news given that it might have some form of life. I say “some form” because it’s 600 light-years away, which is pretty fucking far, and just because it has the conditions for life doesn’t mean it will have intelligent life. In fact, according to the Fermi Paradox, if it did, it’d be pretty likely that we’d already know about it (perhaps a conversation for a different day).

What was pretty neat was that the Telegraph also came out with a story explaining why these discovered planets have such boring names. Fascinating to me, obviously, since I write sci-fi and all my planets are, well… named.

The current system is very straightforward. “If you can see a star with your naked eye, it’s probably got a name,” says Dr Rice, “whereas if it’s been discovered using a telescope it’s probably given a designation. If it’s a multiple star system, like Sirius, the separate stars are given capital letters: Sirius A, Sirius B. The planets around them are then given a lower-case letter in order of discovery: Tau Boötis b, 55 Cancri d.”

But the new missions searching for alien planets are looking at previously unnamed stars. Kepler, the space telescope which spotted the new find, is examining star clusters, and each new star it discovers within them is named after it: hence Kepler 22, the 22nd star with a confirmed planet found by the telescope: 22b is the first planet in that system (planets are never called “a”). Another mission, Wasp, has examined 70 stars, each of which has been named for it: another 24 are named after the telescope COROT, with their planets given the appropriate letter. One of Kepler’s stars, Kepler 11, has been found to have six planets around it, so it gets all the way up to Kepler 11g.

Makes sense when one thinks about it. People have probably been naming stars since forever and this is an easy way to catalog them and move on, without all the international politics involved in giving it a proper name.

It’s pretty exciting news that there’s an Earth-like planet out there. Unfortunately, at 600 light-years away, it’ll probably take a dramatic re-understanding of physics to ever get there and catalog the similarities and differences.

Still, this doesn’t deter me from keeping the names of my planets. It seems to make sense to me that once people start settling a place they’ll come up with a more friendly sounding name than “Kepler-360g”, just say’n.

Lastly, what’s also interesting here is that Kepler-22b is about 2-1/2 times the size of Earth.

Says NPR on the discovery:

The planet is about 2 1/2 times the size of the Earth. It orbits a little closer to its star than our planet does to our sun, and goes around once every 290 days compared with our 365. But its star is a bit cooler than our sun […]

I am curious to know whether there have been any discoveries of actual Earth sized planets. Don’t get me wrong 2-1/2 times the size of Earth is a pretty small rock to discover freak’n light years away but I wonder whether our technology has reached the ability to detect the even smaller.

If not, the egg is on my face for putting the Unified Republic of Stars as close by as I did.

Damn you, science! You keep fucking with our sci-fi!