I don’t generally judge a show by it’s pilot episode. Especially one that has the elements Cleverman has. And I usually wait until it’s over before I review it. But… wow… I’ll be upfront, I don’t have a lot of good to say about this.

Cleverman is a sci-fi/fantasy show set in the near future in Australia where elements of Aboriginal mythology have started coming true.

The pilot begins interesting enough, a girl is assaulted on a bus. But rather than being just a victim, she’s a “hairy” (a kind of warewolf?) who is more than capable of defending herself. Which leads us into the next scene where the mayor/governor/prime minister (it’s unclear which of the three) declare that “hairies” or “sub-humans” are known and supposed to be contained to a district in the city.

So… Supernatural shit? Yes! Australia? OMG, yes! A parable for racisim? Like it. (Not the racisim, obviously, but the metaphor.)

Then there’s a couple of kids who seem to be part of the resistance who help an extended family of hairies escape the zone they’re supposed to live in. Only to turn them into the police later. Only to have a “hairy” little girl gunned down in an accidential shooting. (Maybe cold blood?)

The makings of great stuff. Then it goes off the rails.

I didn’t give spoiler warnings for what I wrote above because, well… I hate spoiler warnings. I mean, what are you doing reading a review if you don’t want to know anything about it? But also because what happens above happens in the first five minutes or so of a fifty minute episode. And it’s a great five minutes.

But after that, the rest of the ep seems to last for two hours. Not good for a show clocking in at under one hour. And that’s usually how I decide if I’ll watch another ep. I usually wait until the second episode to make my final decision but if the pilot, not even a two hour pilot, but a normal length first episode feels like I’m watching a two hour pilot, I’m out. Because, not just is it not interesting but I’m also marking the passage of time and how slow it seems to be ticking.

And what makes it worse is all of the following that it has in its favor.

It has Iain Glen. Probably best known to American audiences as Sir Jorah Mormont (Lord Friendzone) from Game of Thrones. He was also outstanding in season two of Downton Abbey. I mean, jesus, pain is what that guy’s eyes are meant to show. (And to the banner image’s credit, there are two roles I’ll remember him for and one I’d like to forget. Though the man does look good in a suit.)

It takes place in Australia. My friends know this about me but I might as well make it public. I have been in love with Australia and Australians since Love and Other Catastrophes back in 1996. I mean, of course I grew up with Mad Max but I’ve also watched Farscape, MacCleod’s Daughters, H2O: Just Add Water, Gold Coast, Miss Fischer’s, Satisfaction, and a slew of other Aussie programs that have made their way to me via Netflix. And I’ve followed with interest as several of the actors from these shows have made it to America (mostly on the CW).

My ex-girlfriend used to make fun and say that I’d leave her for an Aussie girl because of my obsession with them. I never did. But I do want to see Australia before I die.

It also has Aboriginal mysticism. Something I know nothing about but would love to know a lot more than I do. I mean, the opening title card says that Aboriginal beliefs are the oldest known on the planet, dating back 60,000 years! Yes, please, tell me more about them! 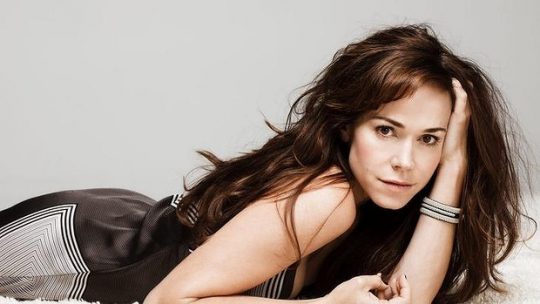 She’s the origin of my whole Aussie fixation…

That’s right. This show also has Francis O’Connor, playing an Australian for the first time since… Love and Other Catastrophes? I think so…

Man… If you haven’t seen that movie… And I haven’t in years because I used to have a VHS screener copy and they never put it out on DVD in the US but it recently dropped on Netflix, do check it out. It’s an independent and clearly made for no money but Francis O’Connor plays a hot, complicated mess with a depth that, unfortunately, she’s never played since. I called her as the “Next Big Thing” back in ’96 because of her charisma but, after a few roles, she kinda fell into the background.

Unfortunately, O’Connor shows up playing just as flat of a character as she did in A.I., and Selfridge’s.

(For the record, I also called Noomi Rapace in 2011 when the Swedish version of the Millenium Trilogy was relased in the US. Again, to mixed results.)

But, unfortunately, O’Connor shows up playing just as flat of a character as she did in A.I., and Selfridge’s. The last time I saw her play fiesty was the terrible Crusade (and a few scenes in the Bewitched remake).

So the story meanders on. And on. And on. And quickly loses steam. Iain Glen, it seems, plays a kind of Rupert Murdoch character (someone Australians, no doubt, have a complicated relationship with), and Francis O’Connor plays some kind of underground nurse.

But the biggest problem with the show, besides under-utilizing the two best actors, is that the main characters (the brothers from the smuggling scene) aren’t just boring but they’re completely unsympathetic given that they ratted out the “hairies” at the begining of the episode.

And if that weren’t bad enough, the whole thing just lost it’s head of steam. There were literally fifteen minutes left in this episode when I started writing this review (or, really, putting together the image of Iain Glen) and nothing that happened in the interim made me look up and want to rewind for not having paid attention.

That this review is almost 1,000 words is a shame because I feel bad for having made you read it. It could’ve been summed up in two: Don’t bother.