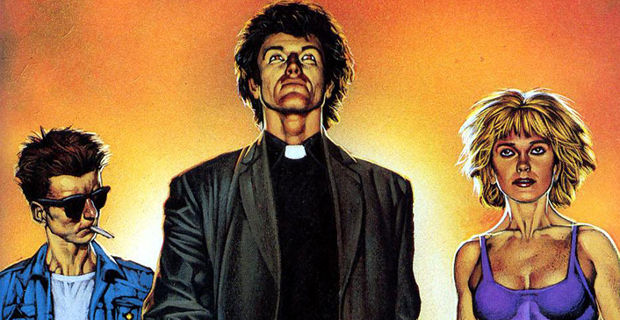 I was in high school when Preacher debuted as a comic book. It was shortly before I started working at the comic shop and I was introduced to it by a guy who, in my mind, still defines cool. As someone who, up until that point, had almost exclusively read X-Men comics, Preacher was mindblowing.

It was a comic with a unique and, at the time, controversal premise. It was ultraviolent. And the characters said “fuck” a lot. But it was also darkly funny in ways that couldn’t even be imagined.

Take for instance, the character “Arseface.” He was the alternative son of a small town Texas sheriff so devastated by Kurt Cobain’s suicide that he decided to follow his hero to grave in the same manner. Only that the shotgun blast didn’t kill him, it just blew off the front of his face.

At one point, Cassidy, Jessie Custer’s hard drinking Irish vampire pal called out, “That boy has the face of an arse!”

That boy has the face of an arse!

To which the, admittedly dim kid, responds in his desire to get vengeance for his father, “Then arseface I shall become!”

It was truly bizarre, right down to the premise of hunting down God to hold Him accountable for abandonning his creation. Along the way, Jessie (the eponymous “preacher”), Cassidy (the aforementioned vampire), and Jessie’s ex-girlfriend Tulip, encounter a serial killer, “sexual investigators”, a enunic hitman, Jessie’s twisted family history, a real “meat lover”, John Wayne, and a religious organization dedicated to orchestrating the end of the world.

How could this possibly become a TV show?

And yet AMC did it. And, based on the first episode, did so surprisingly well.

There are changes. Of course there had to be to make it work in a television format. But absolutely none of them are fatal. Instead, they make me wonder what they’re going to focus on in the first season.

In the first graphic novel, it begins with Jessie already merged with “Genesis”, the ghost that in the show kept exploding holy people (including apparently Tom Cruise). The merging also had the side effect of blowing up his church and killing every member of his congregation and they had the sheriff, convinced it was the work of communist Martians, hot on their tails. The first graphic novel wraps up that storyline.

In the TV show, the congregation survives the experience. And, though we’ve been introduced to the sheriff, I’m curious to see what the inciting act to get him after them might. And how long it’ll take.

In Jessica Jones they made Purple Man the plot of the entire first season and, in a lot of ways, quickly ran out of steam.

It’s a bit like Netflix’s Jessica Jones. In the Alias books (her first appearance), the Purple Man storyline is the last story to be dealt with over four graphic novels. And it wasn’t nearly so drawn out. But in the show, they made it the plot of the entire first season and, in a lot of ways, quickly ran out of steam.

Another minor change is to the character of Tulip, Jessie’s ex-girlfriend. In the comics, she’s certainly capable and, when they meet up again, has decided to become a hitman though she’s failed in her first contract. But in the TV show she’s essentially MacGyver if MacGyver wanted to kill a lot of people. And, unlike in the comics, she knows Jessie is still alive and where to find him.

Considering that a large part of their interaction in the first novel is dealing with their surprise re-connection and feelings for each other, I’m curious to see how they evolve the relationship as established on screen into something more. Right now, they don’t seem to have much screen chemistry. He really just seems tired when around her.

But so far they seem to have introduced a lot of the basic pieces. Preacher, check. Cassidy, check. Tulip, Arseface, the sheriff, Genesis? Check, check, check, and check.

I’ve only seen the one episode so far but I’m already loving it. Can’t wait until AMC gets off their ass and starts releasing more eps already to see if the show gets as truly strange and fun as the comic book did over twenty years ago.