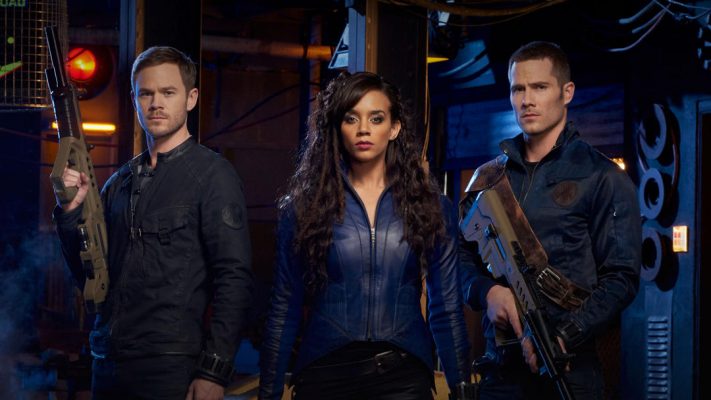 Here’s a show I didn’t expect to like. A story about three bounty hunters (“killjoys”) who maraud through the galaxy on different bounties with modern music and dialogue and okay “ScyFy” special effects. Because… Ugh… How many times have we seen this?

But, like Dark Matter, the concept for this show got a lot stronger after the first ep. It hasn’t shaken all of its initial problems but the strength of the characters and the overall world building became more interesting and dense as the first season progressed. (The second season has only just begun.)

The story, initally, revolves around two “killjoys”, mercenaries who work for a stateless association known as the RAC who’s primary ethos is “the warrant is all” and who will do whatever is necessary to serve that warrant. And they’re allowed to because companies that run star systems and governments view them as neutral. A warrant is issued, the RACs only interest is in fulfilling the warrant. And, though most warrants are issued by companies/governments, the common people also see them as neutral… or more so than the companies/governments that they labor under.

Anyway, the two killjoys the story initially focuses on are John and “Dutch”, a man and woman partnership of some standing. John is smart and tough but, it quickly becomes clear, Dutch is the leader of the operation. And all goes well until a mysterious “level 5” warrant goes out on someone John knows.

He accepts it in Dutch’s name and we discover that the warrant is against someone named D’avin, John’s brother. John breaks D’avin out and Dutch agrees to help clear him of the warrant but that means providing the issuer with something of equal or greater value. Which the first episode does.

And it sets up the story for the first season. Now these three are on everyone’s shit list. Dutch and John because their primary goal is supposed to be the warrant. D’avin because someone issued the warrant.

Will they survive? Can they be a team?

On the surface, it’s a story I feel like I’ve seen/read/heard a thousand times. And, yet, because of the quality of the world building and the strength of the characters and acting, it works as something unique. Sometimes, despite itself.

As far as world building, we’re given that the world is a much larger place, the J-Cluster. And yet, the whole story thus far takes place in a single system with three or four moons (I’m still not sure). So the politics are relatively small and understandable within a few eps.

And, just like Dark Matter, the characters all start as archetypes: The mysterious and oddly skillful leader, the loyal and scientifically and mechanically inclined team mate, and the former soldier with demons. But, given time to breathe, these turn into fully fledged characters so that you can identitify with all of them.

It even goes pretty quickly from episodic to serial pretty quickly, something all shows should really be thinking about in this day and age but, which, some shows (like Longmire) still take a period to edge into hoping to bring as many late-tuners into as possible. But once the serial story gets going, so does Killjoys.

It’s not all love though.

Killjoys has a few problems that remain unaddressed even into the first episode of the second second.

One of which is the soundtrack. It’s not bad. In fact, it’s pretty good, to my tastes. And if you like Souxie or Florence or the Sneaker Pimps, then you’ll probably like it too. But it stands out because it’s the rare sci-fi soundtrack that contains contemporary music.

Which isn’t bad in-and-of itself.

But, there was a reason why Star Trek and Star Wars kept with classical arrangements. Why evem Firefly went with a generic western/Appalachian vibe. And that’s because they are, in many ways, timeless. Just look at how fast the original Battlestar: Galactica aged with its soundtrack or Dune or Ice Pirates. The reboot of Battlestar was smart because it may not have gone strictly classical, though it did in many ways, but it used a lot of world instruments to add an otherworldly feel while not losing its timelessness.

While I don’t mind the current soundtrack, I worry that it will needlessly date the show far before its time.

The larger problem, though, is that its dialogue will date it faster than anything else.

It’s written like a show in 2015-16. It even seems to reference things written in these years, if even opaquely. Not that this would be a problem if there were world analogues. But, instead, the characters come out with lines of dialogue that seems to reference modern world events without any indication as to why the characters in this period (the far, far future) would still be referencing them. And this will, certainly, date the show far before it should.

There’s a reason Heathers is still a classic. They didn’t use slang from the time it was made. Because that would date it. You’d say, “wow… that’s so nineteen eighty whatever.” So they made up their own slang. And, yeah, some of it made its way into popular culture but, aside from the fashion, overall, the movie still holds up.

But, aside from the timelessness a sci-fi show predicting the future should have, the bigger problem is how it breaks the story world. If they had the equivalent of the modern thing they’re referencing in the world, then totally cool. But, without it, I’m broken from the story. I ask myself, “Really?”

To take another story world to contrast, look at Farscape. John Crichton would reference all kinds of American pop culture. But he was also from the contemporary time. And even when he referenced Buffy the Vampire Slayer, he would have had to have been a watcher from the very first season because it didn’t catch on until after he’d left on his mission, but it didn’t break the world.

But to use currently cultural phrases in a show that is supposed to take place somewhere up to four hundred years from now with characters who aren’t that old… It breaks the world.

That said, the storytelling and the characters are compelling. And, I haven’t looked, but if the reception isn’t there, it should be.

Is it Firefly? No. Nothing ever will be. Not because equal worlds and characters can’t be developed but because having the singular control and budget that Firefly had is the exception and not the rule. But, given that it’s in its second season, it could evolve into something great.

The cast is great. The writing is strong. The special effects are really outstanding. The plot has me interested.

I’m really thrilled to see where this show might go.

So… As I’m a creator of a story world, I feel like should address the fact that the main character is named “Dutch”. Because, as you might know, I have a character in my story world named ”Dutch” Warner.

“Dutch” is kind of a classic nickname. I mean, Ronald Reagan was nicknamed “Dutch”. Lot’s of people have been, for whatever reason.

Living from 2134-2209, Stewart Todd 'Dutch' Warner was a major figure in the post-independence Republic, fighting in both the First and Second Republican Defensives in official capacities then going on to become one of the most celebrated NOVA commanders....

The thing, I feel, is that when it comes to where it came from, I have history on my side. This site and wiki are now over five years old. Much older than the TV show (as if I’d be sued for copyright). But the source docs I’ve written are also close to a decade old at this point.

More importantly, as I mentioned above, “Dutch” is a common nickname. And, if my “Dutch” were only ever referred to as “Dutch”, then maybe I’d wonder about renaming him to avoid collision with the show. But, because he’s mostly referred to as Dutch Warner, I honestly don’t think it’s a problem.

“Dutch” in Killjoys is an interesting and compelling character but one with an entirely different backstory than Dutch Warner within the Unified Republic of Stars and I doubt anyone would ever confuse the two.