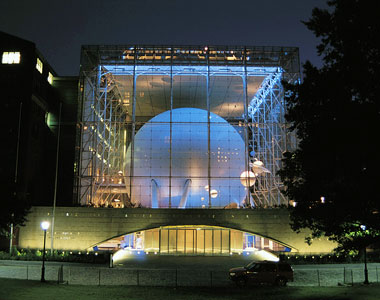 Astronomy Live at the American Museum of Natural History

My girlfriend Shannon, being the thoughtful, wonderful person she is, purchased tickets for she and I to attend an Astronomy Live lecture a the American Museum of Natural History last night. (See here for future events.) The topic was NASA missions over the last fifty years and showing some of the amazing images they’ve returned, including those from Voyager 1 & 2, Cassini, Messenger, and the Kepler Space Telescope. 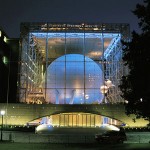 It was hosted by Emily Rice of the AMNH, a research associate with the department of astrophysics in the “Exoplanet Group”, a cool name for any work organization if there ever was one. She was both excited and interesting to listen to as she provided a tour of the solar system, showing a lot of the things our probes have seen.

Afterwards, there was a brief question and answer period (too brief, if anyone from the AMNH is listening) where I was lucky enough to get called on (I just said it was brief, like six questions were asked before they shut it down).

My question was this, “There are two known ways to detect exoplanets, the wobble method and the transit method. Which is the best for discovering the mass and composition of an exoplanet?”

For those not familiar with the “wobble method” and the transit method, they break down basically like this:

The wobble method involves observing the gravitational pull on a solar mass to determine how much mass is orbiting around it. Think of it like a bucket filled with water that you swing around your head. Even though the bucket is moving faster, its rotation keeps pulling you slightly forward and backward as it swings.

The transit method determines whether something is orbiting a star by measuring the variations in brightness we can observe by looking at the star. This is what the Kepler Space Telescope does. By the measuring the amount and frequency of dimming, we can determine how large a planetary body is and its total orbit time, so that an observer looking at our sun would see it dim once a year a small amount every time Earth passed before it. The downside to this method, naturally, is that the observer must be on the same orbital plane as the star and worlds it’s hoping to observe.

Ms. Rice’s answer was, of course, interesting. She said that there were actually five methods for finding exoplanets around stars. I did not know. But that when determining the mass and composition of an exoplanet, both the wobble and transit method were used.

It boils down like this: Most exoplanets are discovered using the transit method with tools like Kepler. Over the course of time, a pattern of dimming is recorded and the orbit time and general size of the planet candidate can be determined. Afterwards, the new candidate is then observed using the wobble method to determine the planet’s mass. Given the mass versus the size, certain assumptions can be made as to its composition.

But, also, as Shannon pointed out, a time consuming venture involving a lot of people to make these determinations. At the very least, two totally separate teams, one to make the original observation and another to watch the wobble and do the math to determine what effects possible planetary masses might be having.

One last interesting thing, for those interested in planet hunting. I think I’d seen this before but it bears showing again, the above image shows the total viewing area of the Kepler Space Telescope in space, represented by the little boxes. Kepler never looks anywhere else.

Now, it bears mentioning that in this tiny portion of the sky that Kepler’s been staring at for the last couple of years, it’s already discovered over a thousand planet candidates around stars out there. That’s mind blowing. And it shows that planets aren’t as uncommon as once thought.

Or as Ms. Rice said last night, “It’s interesting to think that someone born after 1995 would never know there was a time when we didn’t know there were other planets orbiting stars.”

If you’re interested in what the other three methods for discovering exoplanets are, check out this handy Wikipedia article on the subject.