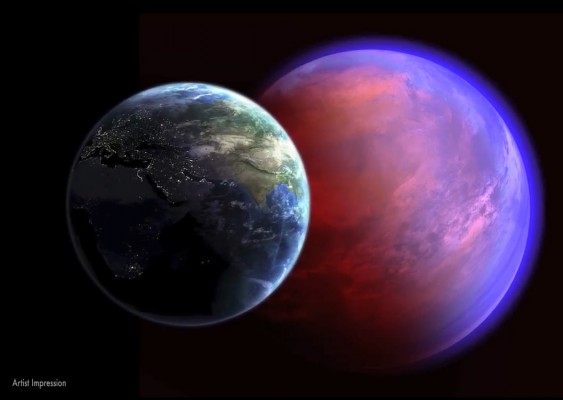 Lots O’ Worlds Out There

Yes, yes, another post on exoplanets. But, for a blog connected to a storyworld that revolves entirely around the idea that Earth-like worlds exist and are settled by humans, it’s not really that big of a surprise, right?

A pair of stories came out recently describing just how many exoplanets might actually be out there. “How many,” you ask. Good question:

Recent research estimates that, conservatively, there are 100 billion stars in the Milky Way and each star averages 1.6 planets. In short, there are more planets than stars.

And from the other article:

Over the past 16 years, astronomers have detected more than 700 confirmed exoplanets and have started to probe the spectra and atmospheres of these worlds. While studying the properties of individual exoplanets is undeniably valuable, a much more basic question remains: how commonplace are planets in the Milky Way?

The team found that approximately 17 percent of stars host Jupiter-mass planets. However, cool-Neptunes and super-Earths are more common, occurring 52 percent and 62 percent, respectively, of the time.

The team’s result is consistent with every star of the Milky Way, hosting, on average, one planet or more in an orbital distance range of 0.5 to 10 sun-Earth distances.

“Our measurements confirm that low-mass planets are very common and the number of planets increases with decreasing planet mass, in an agreement with the predictions of the core accretion scenario of planet formation,” Cook said. “Planets around stars in our galaxy appear to be the rule rather than the exception.”

Why the article didn’t use the term AU or Astronomical Units in place of “sun-Earth distances”, I do not know. But to quote Marsellus Wallace, “Mother fuck’a…”

That’s a lot of freak’n planets.

Of course, between 0.5 and 10 AU is a lot of distance, a lot of it outside the “goldilocks” zone that scientists believe to be the prime orbit for a habitable world. For instance, Jupiter orbits between 4.9 and 5.45 AU from our sun and I don’t think anyone believes that’s within the acceptable range. So we might find a billion or so exoplanets around the stars but only a handful sitting between 1 and 1.5 AU like Earth and Mars do.

Anyway, what’s really cool about this is that it appears scientists will have to begin the process of weeding out exoplanets that aren’t within the acceptable. It also means that someone looking to make a discovery could probably look at any given star and start doing the math and observations required to determine that an exoplanet exists and claim it as their own.

What I’d be curious about it whether someone will ever open up the registry so that geek romantics could start naming worlds after the boys and girls they’re in love with. I mean, hey, having a star named after you is cool but wouldn’t it also be neat to have an entire planet?