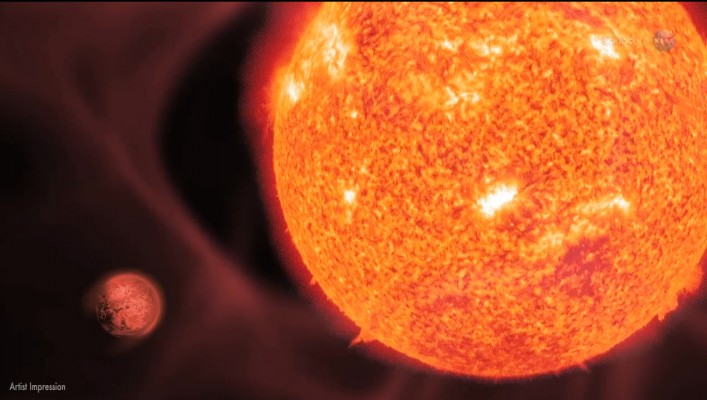 Based on an article I read in Space.com, the exoplanet 55 Cancri e (and, wow, that just rolls off the tongue) is even more interesting than originally thought.

Just in case your memory of exoplanets isn’t as good as you wished, 55 Cancri e was the “super-Earth” that circled so close to its star that it made a complete orbit in just eighteen days. According to the article, that would put it twenty-six times closer to its star than Mercury is to the Sun. So, you know… close.

The obvious conclusion to draw would be that this would be one hell of a baren, rocky world. Of course, that was before the Spitzer Space Telescope got all up in it.

Originally, estimates of the planet’s size and mass indicated that it was an ultra-dense rocky world, but Spitzer’s observations suggest that about a fifth of the planet’s mass must be made up of light elements and compounds, including water, scientists said.

Since 55 Cancri e experiences such extreme temperatures and high pressure, these elements and compounds likely exist in what is known as a “supercritical” fluid state, the researchers said.

If this is the case on 55 Cancri e, supercritical fluids could be seeping out from the planet’s rocks. And, while conditions on the strange world are not suitable to host life, 55 Cancri e does give exoplanet hunters an interesting example to study, Phillips added.

Neat! But unfortunately, I couldn’t find any more information on what, exactly, that all means. Does that place it in kind of a limbo category? Somewhere between a rocky world and a gas planet? Does it bring up any questions as to how it formed?

I do not know. I would, however, like more information if anyone else finds it.

In the meantime, check out the above image, showing the relative sizes of Earth and Jupiter against the Sun and 55 Canceri e against its star. Now that’s one small dot.

Which, by itself goes to show how cool the science is on discovering exoplanets today. Based upon that tiny dots effect on the light from the star we can see on Earth, we’re able to tell the size, mass, distance, and composition of the world. That’s pretty damned amazing, when you stop and think about it.