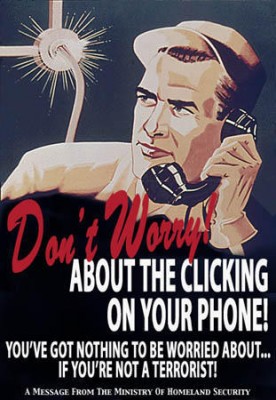 In the news last week was how the NSA apparently has been getting a data dump from Verizon about every call made on its network for the last three months. More disturbing were politicians coming out and telling people, like Harry Reid did, to “calm down” since this was “nothing new” and a “continuation of an existing program”, implying that the NSA has had access to every call made on the company’s network for a while now. It’s also logical to conclude that if they had Verizon’s call data, they also had AT&T’s and Sprint’s. Because… why only have the one company’s?

I would hope anyone would be disturbed by this. I mean, it’s one thing to say, “if you’ve got nothing to hide then don’t worry” but it’s another to know that the government knows everyone who you called. Even someone with nothing to hide is probably scratching their heads and wondering if they maybe did anything. And if they’re not, I believe they should be.

But what makes it all the more disturbing to me is the government’s concept of citizen privacy. Because of what’s sometimes called the “Third Party Doctrine“, the government believes that any information you share with a third party is open to them because, by sharing it in the first place, you have no longer have a reasonable expectation of privacy. Privacy from the government.

So… what kind of information are we “sharing”? Electricity use rates. Dates, times, and numbers of who we call. Where and how much we purchased spent on credit or debit cards. And… ta da! Our locations. Yes, we share our locations because Congress passed a law mandating that all cell phones have GPS chips in them so that 911 can locate us in case of an emergency. And, because of the way cell phones work, the phone companies know roughly where we are when our phones are even just turned on. 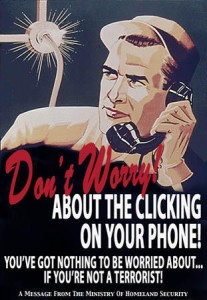 And because we “shared” this information with these third parties (regardless of whether we intended to or knew we were doing it) the government believes that it can access it without so much as a warrant.

This is a big reason why I am not a fan of most “cloud” storage services. Because we’re storing files and data on third party servers, the government believes it has a right to look at it. Just look at the recently leaked PRISM program. Contrast that with a hard drive I have at home. If the government wants to look at that, they need to go before a judge and explain why they have good reason to look at it.

What’s disturbing about this is not that we’re creating a huge paper trail with the companies we buy services from. Okay… for some people that’s disturbing. But for me, it’s part of doing business with them. If you want to have a cell phone, by the nature of the technology, they have to know more or less where your device is and, like all computer systems, they log transactional information including from where calls are made and to where they’re going. The difference here is that if I don’t like what Verizon is doing or they don’t like how I’m using their service, we part ways. In the worst case, there might be a civil lawsuit.

The scary thing about this is that people still say, “If you’re not guilty then you’ve got nothing to hide.” That may very well be true but… do you know all of the laws? There are literally thousands of Federal statutes and tens of thousands of Federal regulations. And those are only the ones believed to be felonies. (Believed to be because even lawyers and the Federal government itself don’t know the exact number.) And that’s just the federal level. There’s also the state, county, and city levels. Given this, are you sure nothing you’ve done is illegal? Are you certain nothing you’ve done is the least bit suspect? Some people estimate that the average US citizen commits three felonies a day…

This is why it’s a world of difference what your service providers know about you versus what your government knows about you.

And what makes it all the more galling is that there are some third party records that, for some reason, the government does believe you have a right to privacy on. Consider your medical records, created and stored by a third party, your doctor. And yet, because we carry a cell phone in this modern era, we no longer have a right for our government not to know where we are every single second or to keep our list of friends to ourselves?

This, to me, is why the NSA surveillance revelations matter. And why it galls me that we’re being told we should all just “calm down”.