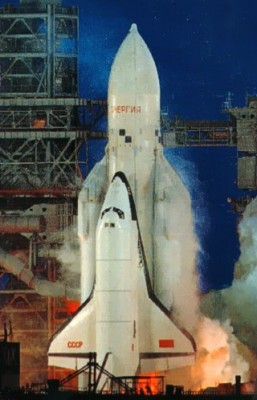 One of my favorite topics was the subject of an article today on Ars Technica: the Buran, the Soviet Union’s answer to NASA’s space shuttle. It details the politics of how the Buran came into being, including many assumptions made on the part of the Soviet military leadership about what America’s space shuttle would be capable of. It’s kind of a time warp to think about a time when the US and the USSR were so at each other’s throats that things like this were seriously considered.

Enjoy the following excerpt from the article:

By 1975, the Soviet military had three years to brood over what the Americans might be up to with a reusable spacecraft as large as the one they were building. NASA even made details about its shuttle program public, so there was little guesswork needed on the Soviets’ part. Soviet military studies found that the American shuttle wouldn’t be economically viable given the parameters NASA announced, and its payload capacity seemed too high for a civilian program.

Launching up to 60 times per year with the capacity to lift nearly 25,000 kg into low-Earth orbit meant that the United States could put a lot of hardware into space each year. It seemed plausible that the Americans were planning to launch experimental laser weapons into orbit—and with the shuttle’s capacity to bring 15 tons back from space, these weapons could be tested in orbit and then be brought back for modification. In the long term, this capability would let the Americans build a functioning orbital battle station.

Soviet fears seemed to be confirmed with the announcement that a shuttle launch facility would be built at the Vandenberg Air Force Base to facilitate DOD launches. And when NASA announced the shuttle’s 1,242-mile cross-range capability, the spacecraft itself started to look like a weapon that might be able to dip into the atmosphere and drop bombs.

First of all, “a functioning orbital battle station”? How cool is that? I mean, how cool is it that they even thought it was a reasonable possibility?

With the luxury of looking back now, you have to just marvel at some of the insane things military planners were thinking of building contingencies for. I mean, imagine anyone today worrying about North Korea trying to build a battle station? We’d call that person crazy! But at the height of the Cold War, I guess there was nothing that wasn’t possible…

So… since Russia had a functional space shuttle, what killed it? Usefulness and politics basically:

There were dissenters, some within the Soviet space and science communities, who called Buran a costly mistake. Critics pointed out that no Soviet satellites were so valuable that they would need to be brought back from orbit for repairs. The lengthy launch preparations, limited launch azimuths, and slow response time as a weapons system left few uses for Buran that couldn’t be handled by existing expendable boosters and spacecraft, all of which were cheaper. Consensus among critics was that the program would languish without a concerted effort to make it truly cost effective.

That and the dissolution of the Soviet Union meant there just wasn’t the political will among the former Soviet states to keep things going. Most of the other shuttles under construction were dismantled or sold off.

And the Buran itself?

As for Buran, the only Soviet shuttle to fly, there’s nothing left. In 1999, the orbiter was moved into the MIK building at the Baikonur Space Port, where it was displayed horizontally mounted on top of an Energiya rocket. But the building fell under disrepair, and in 2002 the hangar’s roof collapsed. Seven workers were killed and both Energiya and Buran were destroyed.