My girlfriend and I settled down the other night and decided to go for it, we watched Veronica Mars: The Movie (VM:TM). No, we didn’t go to the theater. I just wasn’t up for it. Back in the day, there was another television show that got canceled too soon. Fortunately, fans rallied and the creator answered and a movie got made. And it was terrible. I just couldn’t go through it again at theater prices.

I’m talking about Firefly and Serenity, of course. 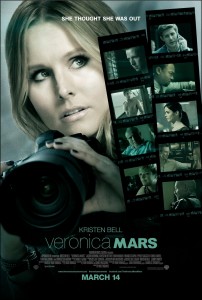 The movie that keeps its storyworld going

VM:TM, however, was not at all the same experience. Not. At. All. In fact, it was a pretty great movie, even if you’d never seen Veronica Mars: The Series (VM:TS).

I’m not going to do a full review, there should be more than a few of them floating around out there. What I will do is point out some of the things that made VM:TM work versus places where Serenity failed, since both are extensions of storyworlds that were developed years before the movies got made.

Like Serenity, VM:TM is a standalone movie. Ideally, even if you’d never seen the series, you should be able to jump into the plot where it picks up and follow along. With Veronica Mars, they’re maybe a little more heavy handed in this area since it begins with a relatively long voiceover narration by Veronica herself sort of summing up the three seasons of the series. This had me worried because voiceovers are blunt instruments and, if anyone remembers The Golden Compass, they can give away information that should generally be revealed through the plot.

Needless to say, it can be summed up that in the fictional town of Neptune, California, a town never known for it’s middle class, the rich have gotten richer and the poor are actively being shown the door. Not that Veronica could do much about it. She was in New York, just having graduated law school and interviewing for her first job as a lawyer. Still with her college boyfriend “Piz” (perhaps the greatest disappointment of both the show and the movie, that she’d even want to be with the guy much less stay with him for nine years).

All is looking rosy until news breaks that a girl she once went to high school with was murdered and the suspected murderer is none other than her tumultuous ex, Logan Echols, again. A plane ticket purchased, she’s back in her hometown and the plot really gets going.

Already, this movie is better than Serenity.

First of all, there have been no major rewrites of what fans know from the show. I don’t remember Veronica actively wanting to be a lawyer in VM:TS, I always thought she wanted to be a cop or something, but staying involved in the legal system makes sense. And though Piz is the ultimate wet blanket and boring dude, her staying with him looks more like nine years of inertia than true love. Compare this to the opening of Serenity, where suddenly Dr. Tam is an action star badass who personally breaks his sister out of a government facility. Say what? In Firefly, he says he paid people to smuggle her out. And, secondly, the guy who’s after them is some guy we’ve never seen before when a perfectly serviceable bounty hunter named Jubal Early could’ve been called back into action in a way that non-fans wouldn’t have known but would have thrilled existing fans. 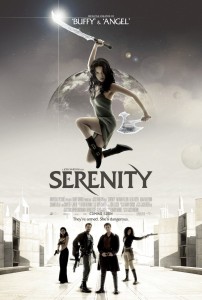 Aaaaaaand… the movie that killed its storyworld. At least officially.

This is exactly what VM:TM did with their murder victim. Her real name was Carrie Bishop, and fans of the show would remember her for falsely accusing a teacher of getting her pregnant when, in fact, it was her friend the teacher impregnated. Yeah, that Carrie Bishop. Non fans would have no idea who she was but it doesn’t matter because Veronica already said she went to school with her. And, that her ex-boyfriend is the suspect, is understandable motive enough to see her getting involved.

Initially, I had a few nitpicks with the movie. Mars Investigations, the office run by Veronica’s father (and the best onscreen father ever) had amazing stained glass windows and was on a main street in the series. In the movie, it’s your average drab PI office in some warehouse district. But, as my girlfriend pointed out, the narration already said that Neptune was gentrifying and pushing poor and working class people out of town. Made sense… move along.

In the series, her father also lived in an apartment complex. Now he has a craftsman house that no one explained. But… again, it doesn’t matter. Fans of the series know he used to be a homeowner before his divorce and disgrace, in the intervening nine years, it makes sense he’d become one again.

Compare these things to the changes inside Serenity made for seemingly no other reason than that they had a movie budget and could spruce things up.

But let’s get to the real heart of the matter, the characters. Like I wrote above, the entire pool of suspects and most of the secondary characters are people that fans have seen before. Rich girl Gia (Krysten Ritter) is back, as is Dick Casablancas (Ryan Hansen), and everyone else fans would remember from one episode or another. During the course of the mystery, several die. It’s pretty intense because no one feels safe. But they don’t kill off anyone who is integral to the Veronica Mars storyworld and by that I mean Logan, Wallace, Mac, Veronica herself, or her dad. The core “Scooby gang” if you will.

In Veronica Mars, a character that’s been in the background since episode one dies. He’s not main cast by any stretch but he’s been the butt of so many jokes, he almost feels like he was. But his death is actually almost pivotal to the plot of the movie and to the future decisions of Veronica herself by the end.

Serenity, on the other hand, manages to kill of two main characters (Shepard Book & Wash) and doesn’t even give compelling story reasons why this should have happened. It’s the equivalent of killing off Tasha Yar in a bad episode where the villain is an oil slick. The deaths just don’t mean anything for the level of character dying. Sure, in the real world death can be meaningless but this isn’t the real world we’re talking about. It’s storytelling. And in storytelling events are supposed to mean stuff.

Lastly, there’s the plot. In VM:TM, the main plot centers around clearing Logan Echol’s name. But it doesn’t mean that the class warfare angle has been forgotten. In fact, there’s a substantial subplot in which Eli Navarro (a man who, through the series, if he didn’t have bad luck wouldn’t have any luck at all) is framed for an attempted assault on Celeste Kane (again, a callback character fans enjoy seeing again but just a stand-in rich woman to non-fans). But aside from some minor wrangling we see Veronica do, the plot is more or less left unaddressed. In fact, it’s basically set up as a possible sequel. We may never get that sequel but we know that the world of Neptune, California is going on and that there are stories left to be told.

But in Serenity, it’s not enough to have a bounty hunter after the Tam siblings, they also build in the whole bit about the Reavers. In the show, Reavers were men who reached the edge of space, saw the emptiness, and went mad. What better description for a mysterious group of bad guys could you ever have? But, nope, thanks to Serenity, we really find out that they were the by product of an FDA trial that went wrong.

Thanks Joss! You now rank up there with George Lucas for coming up with a great idea and then taking a great big dump on it.

Wrapping up the Reavers mystery, getting the government off the Tam’s back, and killing off the two aforementioned main characters basically left the world of Firefly… done. It was as if Joss Whedon knew the movies wasn’t going to be a hit and decided to cap it all off just to be done.

All of which is to say that Veronica Mars did it right and Serenity did it wrong. I hope Veronica does well because I’d really like to see what Rob Thomas comes up with next.