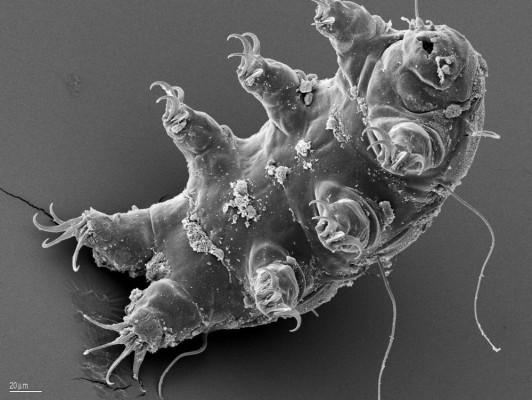 Recently, I read this article in Wired, about the microscopic organism called Tardigrades. The article talks about experiments sending Tardigrade eggs into space. The reason? Tardigrades are capable of putting themselves into a kind of dehydrated stasis. In this state, they are able to survive extremes of cold and heat from  just 1 degree above absolute 0 to 300 degrees, as well as the vacuum and radiation of space. This Science Friday video is a nice, concise introduction to the little beast:

We go to great lengths to cast the universe in our image. We imagine Gods that look like us. We speculate on our role in the cosmos and wonder what makes us so special. But when I see something like the Tardigrade, I can’t help but wonder if the Universe has other ideas. I wonder if the Universe regards us as little more than a failed experiment long ago tossed into the dustbin of evolution. We evolved the capacity to think, to deal in abstract ideas, to create art and do math, and overall just be so smart. But what if none of those things fit what the Universe finds important? What if our complexity is our failure?

Like so many other things in life, the key to the Tardigrade’s, and other extremophiles’ success, is simplicity. The Tardigrade is small, does not have a brain, cannot think or imagine space travel, much less muster the ambition to accomplish it. It spends its life in a dark haze of simple processes it has no control over and no choice in. But because of this, it can survive.

Imagine an asteroid striking the Earth, and bringing about a new new mass extinction. Imagine that asteroid strike is so large, it actually knocks a chunk of the Earth off, sending trillions of dormant Tardigrades hurling into space? The little Tardigrades drift to Europa. They remain dormant for a few hundred million years until the conditions are right, tidal forces from Jupiter cause more and more geothermal heat to rise up in the frozen moon, and the Tardigrades not only wake up and go about their lives, but they start to adapt and evolve.

In that Science Friday video, they point out that Tardigrades are a different phyla from us. That’s pretty impressive given that the video also points out that we are in the same phylum as a Sea Squirt. What kind of creature might the Tardigrade evolve into?

What does the Universe want? The dinosaurs ruled our world for 135 million years. And it was only an accident of nature (be it asteroid, super volcano, or whatever) that wiped them out and paved the way for the rise of mammals. Would dinosaurs have evolved into something we’d call intelligent? I think there are some physiological reasons that might not have been possible. But also, why they would have to? Our brain is basically the survival tool we evolved. We don’t have claws, we don’t have hard shells, or really any way to defend ourselves in nature. We’re soft, squishy, and overall physically weak. The shark has had no need to evolve an advanced brain. To paraphrase Lenny Bruce: “You argue with a shark and he just eats you.”

In my own feature film, THE LOST CHILDREN, there is a cult who believes the world is threatened by a race of beings known as the “Almighty K’Taan”. The K’Taan are described as “one of the oldest races in the Universe…”. They ride on an asteroid through space until they come to a planet with life. Then they stop. And they feed. When they’ve devoured everything on that world, they go dormant again, and wait for something to send them back into space. Something always does. They may wait millions of years for it, but something always comes. The K’Taan are not intelligent in the way we are. They are like giant insects who just do. Like this emerald jewel wasp:

Imagine that wasp ten stories tall and descending on the Earth by the millions. That’s the K’Taan.

Human Colonization of Other Worlds

I’ve been vocal in the past about my support for robotic space exploration. It simply costs far too much just to keep us alive in space. I would much rather see a swarm of thousands of micro robots, armed with quantum computers capable of processing any amount of information, sent to every nook and cranny of the solar system, than see more money, time, and energy spent figuring out how to get a human to Mars.

Look at this video about MIT’s printable robots:

Imagine an army of a million robots that size, with quantum computer brains and miniaturized cameras, shot at Titan. Printed on some crazy form of carbon fiber or whatever. Of course, NASA already thinks like this. This is the “Better, Cheaper, Faster” philosophy that led to the Mars rovers, which can be counted among the most successful missions in the agency’s history.

Looking at the bigger picture though, I can imagine a future where these types of machines, coupled with our fleet of amazing telescopes such as Hubble, Webb, and the Square Kilometer Array, make up our journey into the Universe. These devices become extensions of us. Because the thing is, we need these things to do the science anyway. No matter how many people we send to Mars, they’re going to have to take computers and spectrometers and all manner of gadget anyway. But why not let our gadgets do the travelling, and use our technology to explore the Universe virtually right here from Earth?

I’ve heard the argument that we should colonize other worlds for the sake of our species. If there were some extinction level event on Earth, at least the race of humans would survive. I can see this, though based on my statements above, I don’t really agree with the notion that it’s important for humanity as a race to survive. If we did get to our nearest neighbor, it’s a long way from hospitable to humans. We would still be living in shells and tin cans. But let’s say we tolerate that, and send a population to Mars. Where to then? Perhaps the aforementioned Jovian moon Europa? Sure, our Tardigrades might like it there, but it would still require overwhelming technology and expense just to keep us breathing. And where to then? The further we get from our sun, the harder it gets. And if we ever made it past the Oort cloud, it’s a whole lot of nothing until we get to the nearest star, Proxima Centauri. From Wikipedia:

The nearest known star to the Sun is Proxima Centauri, which is 4.23 light-years away. Though, there may be undiscovered Brown Dwarf systems that are closer. The fastest outward-bound spacecraft yet sent,Voyager 1, has covered 1/600th of a light-year in 30 years and is currently moving at 1/18,000th the speed of light. At this rate, a journey to Proxima Centauri would take 72,000 years. Of course, this mission was not specifically intended to travel fast to the stars, and current technology could do much better. The travel time could be reduced to a few millennia using lightsails, or to a century or less using nuclear pulse propulsion. A better understanding of the vastness of the interstellar distance to one of the closest stars to the sun, Alpha Centauri A (a sun-like star), can be obtained by scaling down the Earth-Sun distance(~150,000,000 km) to one meter. On this scale the distance to Alpha Centauri A would still be 271 kilometers or about 169 miles.

So, barring some invention such as the Ion-Plasma Drive, it’s a long, long trip. And then of course, we’d need somewhere to land once we got there. There are no known worlds in Proxima Centauri‘s habitable zone.

We’ve evolved to be  incredibly ill suited to space travel. We have the minds to imagine it, and the will to attempt it. But are we meant to do it? The Universe may have other ideas. The Universe may want the Tardigrades to rule.

Mark Harris is a technologist and a storyteller. He is currently putting the final touches on his film THE LOST CHILDREN. Visit the site to find out more and participate in its upcoming release.