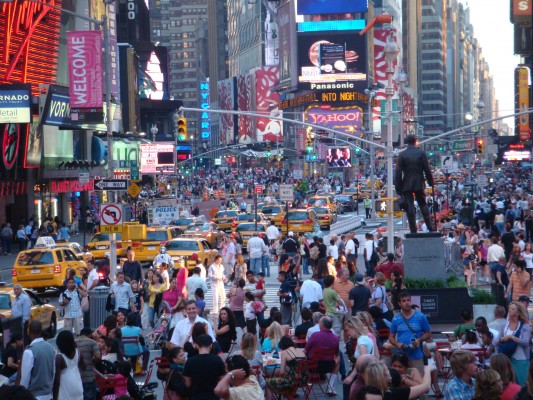 How Many People Can A City Hold?

The New York Times the weekend before last posted a really great article on how many people Manhattan could theoretically hold. For those who have never been here, the layout is like a forearm, long and skinny. It’s roughly two and change miles at its widest and thirteen miles at its longest. And according to Wikipedia, it’s denser than any county in the country with an estimated 71,201 people per square mile.

Of course, this is down from its peak from 1910 when 101,548 people per square mile inhabited the island. Over 2.3 million people lived in a space of 22.7 square miles. As the article says:

Some perspective: As crowded as the city feels at times, the present-day Manhattan population, 1.6 million, is nowhere near what it once was. In 1910, a staggering 2.3 million people crowded the borough, mostly in tenement buildings. It was a time before zoning, when roughly 90,000 windowless rooms were available for rent, and a recent immigrant might share a few hundred square feet with as many as 10 people. At that time, the Lower East Side was one of the most crowded places on the planet, according to demographers. Even as recently as 1950, the Manhattan of “West Side Story” was denser than today, with a population of two million.

Ah… those savage days, when people weren’t telling you how many people could live in the building you owned. Hey, you may not like that kind of poverty but also realize that everyone looking for a place to live could find one and that it was also just a temporary stop on their way to establishing themselves in a new country.

Not that it matters to some people:

[..] it’s possible the city could grow so crowded it would turn off the likes of Cleo Stiller-Farrell, 25, who was born in Manhattan and works on the 54th floor of a Midtown office building for a biotech hedge fund.

“You just see yourself doing things that your mother would be ashamed of,” she confessed. One example: cutting off an elderly woman on the sidewalk and thinking to herself, “Your scooter is taking too long — outta my way, lady!”

Already wishing the city could cap the number of people moving to Manhattan, Ms. Stiller-Farrell says she dreads every new building she sees — her imagination immediately launches into an apocalyptic vision of skyscrapers and darkness worthy of science fiction.

“How many years does New York have before it starts to look like ‘Blade Runner?’ ” she asked.

So… she acts like an ass, blames it on the crowded city, and then compares it to Blade Runner, an admittedly dark movie but a world and city in which many people I know would like to live. Beyond that, she’s twenty-five years old and grew up in the city but would like to cap others from doing the same? Fuck a duck, lady!

Anyway… how many people could Manhattan potentially hold?

But what if you built a Manhattan that looked more like Hong Kong? Grafting the density of Hong Kong’s most crowded neighborhoods onto Manhattan’s area would inflate the population to 2.6 million people. Our apartments might be smaller and on higher floors, but our standard of living would not be radically different.

Could New York’s infrastructure support all those people? Water is one of the last resources the city is worried about. New Yorkers have actually been using less water (both per person and as a city) every single year for the past 20 years [..].

Power? Choose your experts. ConEd, which carefully monitors peak power usage, going so far as to conduct an “air-conditioner census,” says it’s on it. But Kate Ascher, who teaches at Columbia University and leads Happold Consulting’s American practice, says the city’s power system is frail and in serious need of new power plants and transmission lines.

Garbage? New York already ships its trash to a handful of states, including Pennsylvania, Virginia and Ohio, so more New Yorkers would just add to the thousands of tons of garbage hauled away from the city every day by truck and barge.

Transportation, however, is where the average New Yorker feels the pain of crowding most acutely, especially on the subway.

“The system is at capacity all the time, except at night,” said Sarah Kaufman, a transportation and data expert who recently left the Metropolitan Transportation Authority to conduct research at N.Y.U. Unless the authority builds more train lines, all it can do is run trains closer together by installing new computer systems.

But such problems are rarely insurmountable, said Ms. Ascher, whose 2005 book “The Works” anatomized New York’s infrastructure. For example, she notes that after the Great Blizzard of 1888 snapped power lines across Manhattan amid 20-foot snowdrifts, the borough was inspired to put them underground.

All very interesting… And if you haven’t already you should read the whole thing here. In essence, it appears there’s no upper limit to human density taller towers, better infrastructure, a little technology, and a lot of human ingenuity can’t solve. That’s awesome in my book.

When I was creating the Unified Republic of Stars, I specifically modeled certain places after real world places as it both provided a template for the culture that would be there as well as a realistic feeling for fictional places. Athena City was one such place.

I always imagined it a New York type city but on a larger island somewhere just north of the Caribbean climate, sometimes hot, usually warm, and rarely really cold. And it was purposely put on an island on a world without much landmass to ensure high density.

Athena City is one of the largest cities within the Unified Republic of Stars, with over 15 million inhabitants. It is also one of the first cities to be established and helped spark the independence movement within the former Colonial Star Cluster....

In Athena City though, there isn’t the same restrictions on building that there are in New York and I imagined much taller, mixed use towers covering most of the island, except for the beaches because, hey, people need a place to drink margaritas, right? But what I always wondered was, is Athena City realistic?

There are a couple of questions that can really be answered with science-fiction. For instance, on a world with so little landmass, would a Vertical Garden, or even a lot, really produce enough food to keep people not just fed but maybe fat and happy?

I don’t know the answer but I hope so. Vertical gardens are something I’d like to see become a reality in my lifetime just because of the reduced transportation fuel use and costs and the advantage they have of serving a dense population right at their doorstep. Of course, in a place like New York, were farmland is so close, that may never become the case, but on a world like Athena where shipping would be much more expensive, perhaps it would be.

A vertical garden is a greenhouse on a massive scale intended to provide fruits, vegetables, and possibly livestock to an urban population....

Either way, the above article was really inspirational just from the standpoint of knowing that people can and have lived almost literally on top of one another and that it hasn’t broken down into some dystopian future imagined by twenty-five year old hedge fund workers.