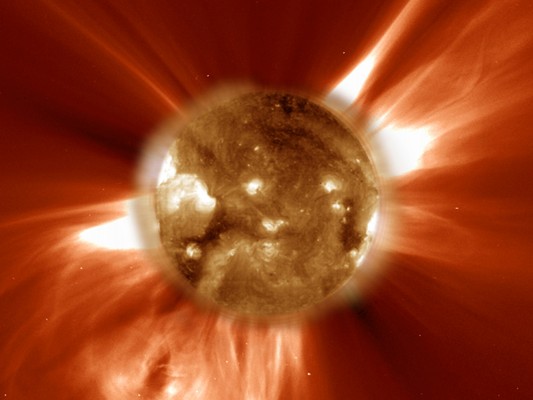 Coronal Mass Ejections, Not Just Pretty to Look At 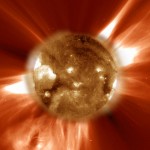 Not some cheap effect, this is the sun fucking exploding.

Saw an amazing video linked from a Gizmodo post yesterday that showed something amazing trailing behind Mercury as it was blasted with a coronal mass ejection (CME).

What the hell is a “coronal mass ejection”? Essentially, it’s a massive burst of solar wind and plasma escaping a star’s magnetic field. A star like ours. It’s pretty fucking impressive. The top image shows a CME in ultraviolet light but it’s still pretty clear the sun just erupted with a massive amount of energy.

So why talk about them? I mean, what difference does it make?

Well, first of all, when that energy hits Earth, it creates a lot of pretty lights. They’re nice to look at despite the fact that if it weren’t for our magnetosphere we’d be pretty much cooked hens. 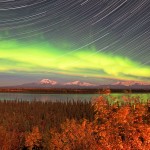 Still pretty despite all the stuff the sun is doing to try and kill us.

The power lines that conduct all the electricity that keeps the lights on can be overloaded by the currents a CME creates on Earth and blow out the electrical systems that connect everything together causing blackouts where it happens. This may not sound like an especially big deal. But it is when one considers that solar storms can last not just for days but for months. And when the Sun becomes a cranky bitch, that’s when we have real problems.

These generated currents can easily overload and short out the transformers at the end of the power lines. And not just in one place but everywhere at once. This is a problem because there just aren’t enough replacement transformers to handle a worldwide meltdown. What it could mean, if a major CME were to erupt, is not just days or weeks of being without power but possibly years.

Think it can’t happen? Well, it’s happened before. According to NASA, in 1859:

Back in 1859 the invention of the telegraph was only 15 years old and society’s electrical framework was truly in its infancy. A 1994 solar storm caused major malfunctions to two communications satellites, disrupting newspaper, network television and nationwide radio service throughout Canada. Other storms have affected systems ranging from cell phone service and TV signals to GPS systems and electrical power grids. In March 1989, a solar storm much less intense than the perfect space storm of 1859 caused the Hydro-Quebec (Canada) power grid to go down for over nine hours, and the resulting damages and loss in revenue were estimated to be in the hundreds of millions of dollars.

The solution governments and power grids have been using to counter this in the meantime has been to turn down the power grids when the NASA SOHO observatory notices Sun activity that might have a disruptive effect on Earth systems.

But will this work in the long term?

Next time someone complains about our crumbling bridges and declining infrastructure, remind them that without a functioning power grid built to withstand these massive solar events, life as we know it will literally be thrown back a hundred years.