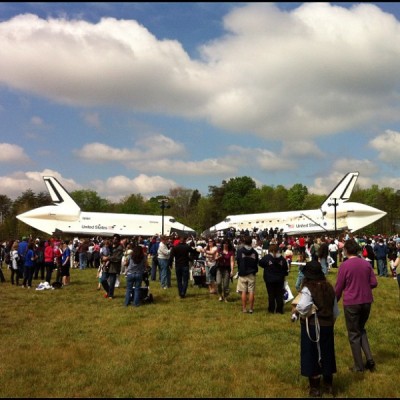 Why NASA’s Victory Lap Should Be A Tour of Shame

It’s been in the news all week about the Space Shuttles being delivered by NASA to various museums around the country. Next week, New York will be getting the Enterprise, which was just yanked out of the Smithsonian in favor of Discovery there.

Naturally, NASA has been as subtle as a sledgehammer, mounting the shuttles up on its 747 and doing flybys Houston and Washington DC and, next week, New York with the press and politicians going mad with pride that these decommissioned space ships are coming to their town.

This is messed up.

These things are meant to fly into space. They’re space ships! Now and forever more they’re going to be grounded and stuck in museums for kids to climb around on and be told about when America once had the ability to put people into space. And in the meantime, we have nothing to replace them with. We’re not building a replacement. And, adjusted for inflation, NASA’s budget is being cut, year after year.

But NASA is eating up the PR, actually bragging about it on Twitter.

Well, eat it up, mother fuckers! Given your mission, this is a failure and it’s only a matter of time until everyone else, including you figures it out too.

Without manned space flight, it’s difficult to keep the average person interested in the scientific work that’s being done. But regardless of your thoughts on the value of human space flight, it’s a core mission of the agency. And if they’re not going to do it any more, then why keep them around?

Sure, the space shuttle had its problems. Even a die hard fan of them like me has to admit it. But parading around a thirty year-old achievement as they’re being mothballed as though they did something important recently should be viewed as sad if not ridiculous. Not having a plan in the works should be regarded as utter failure.

What do you think? If NASA’s not doing human space flight any more, should the agency be scrapped? What’s your feeling about the private space companies that are starting?