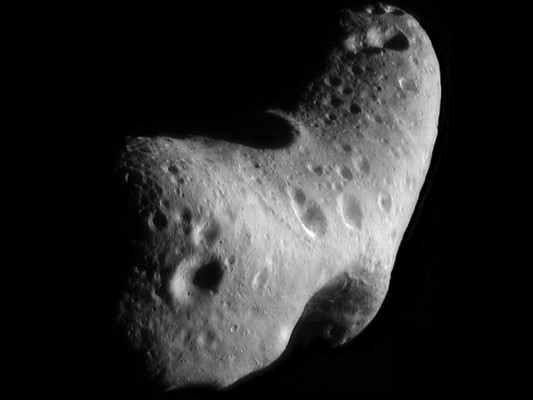 I realize that I’m a little late to the party on this one but apparently a group of really rich people are looking to start a company that will mine asteroids in space for their rare and precious materials. This group includes such lightweights as Peter H. Diamandis (of PayPal and X-Prize fame), Larry Page and Eric Schmidt (from Google), and James Cameron (of making your life seeming boring with everything he does) among others. See here for an interesting FAQ.

Pretty neat stuff, really. It sounds strange, but the thing with the most value that they could find would be water. Water, after all, is necessary for us to survive but it’s heavy and that makes it expensive to take up into space with conventional rockets. Finding it up there and keeping it there for use would actually save millions of dollars in the short term. But, of course, there are also rare metals and compounds that might also be useful down here.

If you haven’t seen this yet, you really should:

Naturally, after the announcement was made, questions began popping up about could they even do it? With James Cameron involved, I can only imagine that they’ve figured out a way or, if not, will do so shortly. But this article really grabbed my attention, asking does asteroid mining violate space law?

Naturally, there are a couple of viewpoints. On the pro side:

Art Dula, a space law professor at the University of Houston, believes private companies absolutely have the right to mine an asteroid. “The 1967 Outer Space Treaty specifically permits the ‘use’ of outer space by nongovernmental entities. There is no suggestion in the treaty that commercial or business use would be prohibited,” Dula told Life’s Little Mysteries. In his opinion, the treaty and a subsequent United Nations resolution established that national governments themselves are responsible for regulating the use of outer space of citizens and companies within their borders.

Thus, because the billionaires are American and forming their company in the United States, the U.S. government is charged with giving the go-ahead to the billionaires’ bold new project, he said, and the Constitution ensures it will do so. The 10th Amendment — which states that all powers not delegated to the federal government, nor prohibited by it to the states, are reserved to the states or to the people — means that the right to mine an asteroid belongs to the people.”I am pleased to say that the American people and the corporations they form are presently free to conduct mining operations in outer space for commercial purposes, as this activity has not been made either illegal or regulated by the federal government or the several states,” Dula said.

First… “space law professor”? I find it both amazing and unsettling that lawyers have managed to insinuate themselves into something as awesome as space. But anyway… onto the con side:

Frank Lyall, public law professor at the University of Aberdeen, Scotland, and director of the International Institute of Space Law, and Paul Larsen, a space law expert and adjunct professor at Georgetown Law School, both interpret the OST as meaning that no one — neither a government, nor a person — can claim title to an asteroid, or the precious metals therein.

The point is proven by a 2001 court case, they said. In 2000, an American man named Gregory Nemitz registered a claim to the asteroid Eros. When NASA sent a satellite to investigate this asteroid soon after, Nemitz sent a letter to NASA telling the space agency to pay parking fees for landing the satellite on his property. “NASA declined and so did the U.S. Dept. of State,” Larsen explained in an email. “The reason is that the 1967 Outer Space Treaty, Article II, specifically states ‘outer space … is not subject to national appropriation by claim of sovereign, by means of use or occupation, or by any other means.'”

The article goes on back and forth, back and forth, with the eventual ending that if we want to encourage companies to harvest and Earth to benefit from the potential resources of space eventually there will have to be some kind of acknowledgement of property rights in space.

But here’s where I’d like to add a few points, both from a science-fiction as well as historical perspective.

Firstly, as to the claim about Eros, sure… claim away. As anyone who’s seen Deadwood knows, it took a claim, improvement upon the claim, and active work on it to maintain the claim. Looking through a telescope and seeing a big rock in space may be the first step but Nemitz hardly satisfied the second two criteria. In this case, I believe the court decided correctly or we could all start looking for things in space and claiming them. Are you looking at Jupiter? Ten bucks, please.

Secondly, I do agree that some degree of property rights will be necessary to encourage others out into space. I believe that the Outer Space Treaty was written to prevent the US or the Soviet Union from laying claim to things like the Moon in its entirety or sending things into orbit. (Which, incidentally, probably also stopped additional hostilities. Imagine the two nations engaging in a very real shooting war over one nation not allowing another to send up satellites…)

I don’t believe that, in 1967, anyone would have even dreamed that getting into space was possible without government support.

That was then, and this, obviously, is now.

In the Unified Republic of Stars storyworld, private companies did all of the work to make space a place where people not only did work but toured and vacationed and eventually explored and settled. They did this despite the Outer Space Treaty because they were private entities and Marriott, for instance, wasn’t trying to lay claim to the entire moon when it built its little resort. But also, the various nations, through inaction at the UN, allowed this to happen because they saw these private entities acting almost as representatives for the nations by proxy.

Marriott builds a resort on the Moon? Small win for the US! Etc…

Anyway… throughout history the only way to encourage development of resources is to allow private parties exclusive ownership. I believe a prime example of this is the difference between the logging and fishing industries. And, thus, like the article basically says, property rights in space are almost inevitable.

What do you think? What’s the best way to encourage private parties into space? Do you think property rights are the key or something else?