Chapter Four of Solider of the Republic Posted

Hey everyone, sorry for being so quiet recently. Been working on a software project that, believe me, I will tell all about shortly, so I haven’t had a lot of time to focus on the URS. However, in a few weeks, I’ll have a bunch of new stuff. But more on that later. 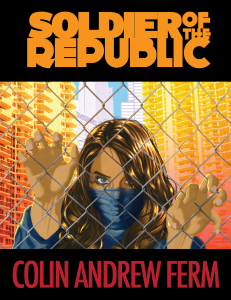 First, I’m pleased to announce a new chapter in the ongoing saga of Meifen Rassmussen, Try Outs. You can read it on Wattpad here and, if you like it, be sure to vote for it. The more votes it gets, the more other people might find out about it and the Unified Republic of Stars storyworld.

For those of your who haven’t been reading the story yet, Soldier of the Republic is the tale of a woman searching for meaning as the entire world is changing around her. In prison while the Colonial Star Cluster declares independence from Earth, Meifen Rassmussen must decide what role she will play in the young Unified Republic of Stars or whether she’ll return to her bad ways.

It’s part of a novella being written for the Wattpad community and we’re excited to see how both the URS storyworld and concept is received by an active community of readers and writers. You can read starting from part one here.

As for other news, as I said, I’ve been working on a software project. This project is, unfortunately, totally unrelated to the URS storyworld. But, while I’ve been working on that, I’ve also been writing a new history book that I’m proud to announce is titled A History of the Rise and Fall of the Universal United Human Authority. Ever wanted to know how Earth was taken over and ruled by the UUHA? Well… here’s your answer. Finally, a history that describes what was going on on Earth while the Colonial Star Cluster slowly became the Unified Republic of Stars.

I hope to have it posted in a few weeks and am excited to see what everyone’s reaction will be. And, for those that are curious, yes, of course this will have footnotes. What would a URS history book be without them.

Look out for the blog returning shortly and more exciting news about URS!