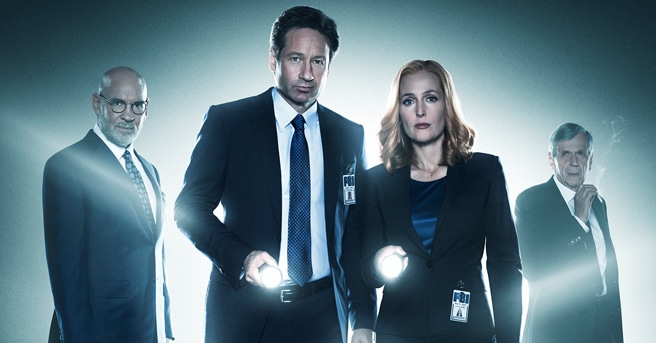 It’s crazy when you think about it… I’ve been watching the X-Files since I was 13 or 14 years old. There was a girl in high school I was crazy into and the X-Files was our bonding thing. I also had the very first studio approved X-Files t-shirt I picked up at the San Diego Comic Con back when it was still an event mostly made up of guys with boxes of old comics they were trying to sell and a few writers and artists.

Schedules change, life happens, and I think I stopped watching the X-Files around the fifth or sixth season. I’ve seen past it since I think I own up to season eight on DVD box set but I really stopped loving it after the sixth season. Something about it just went south. The change to filming in LA? I’m not entirely certian.

Personally, I feel it was the conspiracy. I never really felt it was that compelling in the first place but when it became more and more important to the plot, especially once Mulder was written off, the show really hit the skids for me.

It wasn’t the blooming Mulder/Scully romance, that held nothing for me. In fact, I was one of the rare fans that didn’t want that to happen. I knew nothing about the “Moonlighting Phenomenon” in the mid to late 90’s. I just thought it was cheap drama. And when it happened, it was…

That said, when they announced that the X-Files was coming back for an six ep run, I bought the season pass despite how bad the last movie was. The X-Files doesn’t make for a good movie experience but, at it’s best, it can be top television.

Unfortunately, as much as I love the golden age of television we’re living in now, doing plot continuity for the X-Files means digging up the conspiracy plot. Which, frankly, is just boring. Even as a fourteen or fifteen year-old. And part of that might have been my dad sitting next to me saying, “The pentagon can’t even keep five-hundred dollar toilet seats quiet. How would they keep aliens out of the public eye?”

Which was an entirely valid point.

Back in my teens, I wanted conspiracies to be true. I wanted to know the world was as shitty as I saw it because out there, somewhere, was someone working to make it exactly as it was. As I’ve gotten older, unfortunately, I’ve just learned that our government is basically corrupt, policies have been enacted that has made building, well, everything more expensive, and our infrastructure sucks because of the other two things have made it too expensive to make better.

It’s not as exciting as the pitched conspiracy on the X-Files but Occam’s Razor says that it’s infinitely more likely than some grand conspiracy among a few people to make things super shitty.

Which made “Season 10” of the X-Files a bit of a dissappointment. It wasn’t bad. In fact, its highs were better than some of the better seasons and none of its lows were as bad as its worst seasons. The only issue I had as that the X-Files was at its best when doing “monster of the week” stories and at its worst when doing “conspiracy stories.” And with six eps or so, they had time for two monster stories and the rest were were conspiracy.

That said, it’s paramount episode, in my mind, was “Mulder and Scully Meet the Were-Monster”, a quintessential X-Files “monster of the week” story. Along the way, they even managed to throw in a tribute to one of the production staff who’s death (Kim Manners) actually inspired Vince Gilligan (a former X-Files writer/producer) to create Breaking Bad.

Season 11 has been significantly better. Firstly, they have more episodes, ten this time around. Which means they’ve been able to do more monsters of the week.

They haven’t all been successes. But neither were the ones on the original series. In fact, where the X-Files has failed, it’s been in trying to keep both movies and all the late episodes in cannon. If they could jettison some of the baggage, the overall show would be stronger. But I think they’re trying to pay off the fans who have been with the show forever which is a pleasant change of pace from Disney who killed most of the expanded universe of Star Wars. Though there are definite pluses and minuses on both sides…

The two real winners this season (and ones that I believe honestly make buying the season as a whole worth it) are “The Lost Art of Forehead Sweat” and “Rm9sbG93ZXJz”. The first is a classic piss-take on the whole X-Files universe that the show can do so well with eps like “Jose Chung’s ‘From Outerspace’” and “The Post Modern Prometheus.”

The writers know the conspiracy is a bunch of bullshit and so does the audience. But eps like this allow everyone to blow off the steam of taking it all too seriously while having good fun with the mythology that has been created. It’s, frankly, awesome if you’re an X-Files fan.

“Rm9sbG93ZXJz” is a bit more complicated. It goes back into the well that was tried in Season One with “Ghost in the Machine” and “Kill Switch” in Season Five (which was co-written by William Gibson) but manages to actually tackle the subject better than it has before.

If there’s one thing that makes “Rm9sbG93ZXJz” better, it’s that the writers seemed to understand technology better this time around. But that they also made the first two acts almost wordless also seemed to show they they were more confident with the topic this time around.

Truly, it was an amazing episiode.

I have to say, as an original X-Files fan, I’ve honestly been loving these new episodes. I like the time they’re taking developing Mulder and Scully as they’ve gotten older while still doing the best (and worst) of what made the X-Files the X-Files.

If I had one item on my wishlist I really wish they’d go back and revisit, it (obviously) wouldn’t be any of the conspiracy stuff but instead an episode from Season One called “Eve” in which two little clone girls kill their fathers. There’s still never been an ep of the X-Files before or since that has given me the creeps like that one and, since they were ten or twelve at the time that ep was made, I think it would be even more fascinating to see them now twenty years later up to some deadly hijinx.

Boiling it down though: for old-school fans of the X-Files, there is a lot to see in these latest seasons. But if you never really watched the show in its peak, I would have to say that you’re better served by going back and watching seasons one to six and then, if you made it through, deciding whether you’re still interested enough to see new adventure.

My one exception to that is “Rm9sbG93ZXJz”. As an ep… I think it could stand with the best of the Twilight Zone or Black Mirror episodes without having to know anything about the series.