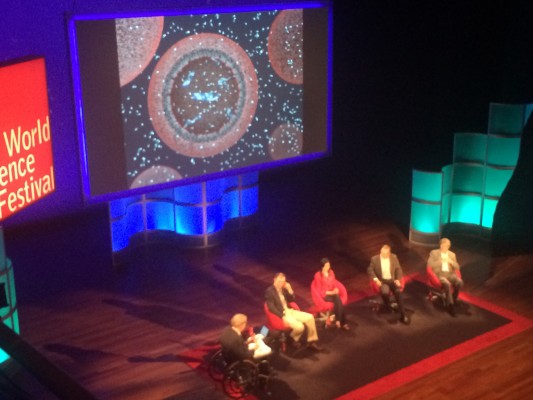 World Science Festival: Alien Life: Will We Know It When We See It? Part I

Just a warning, this post is going to be broken up into two parts, part one of which is this and won’t have a whole lot to do with the World Science Festival itself and will instead pretty much consist of two minutes of hate towards a New York Public Radio personality. The second will deal with the actual panel and what was and wasn’t learned there. Hey… if AMC can break up the final seasons of Breaking Bad and Mad Men, I can do it with a freak’n blog post.

I’ve hated this guy for about as long as The Takeaway has been on the air.

For those of you who don’t listen to Public Radio or are lucky enough to live in the markets where The Takeaway isn’t purchased by your local cash strapped NPR affiliate looking to save a few bucks, it’s a current events show that launched three or so years ago. There’s nothing really that profound about it. They use outdated computer bloop-bleep sounds to break up segments and promo upcoming features (a real joy when it’s the show you wake up to in the morning). And it follows what people in the media today think an audience wants when hearing the news: their basic ideology reinforced by the host rather than dispassionately reading the news.

Hey, my ideology isn’t that of the typical NPR listener, I get that. Still, when you have someone on for a segment about natural gas fraking who works for the industry to ostensibly explain how the process works, it seems a little disingenuous to then talk over them and try to make them admit they want to destroy the environment.

But that’s just me. 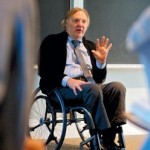 Because it sure as hell doesn’t bother John Fucking Hockenberry. And if you’re wondering if I’m writing about the shithead in the wheelchair to the right, you are correct. Hey, just because he can’t walk doesn’t make him not an asshole.

As proof, I offer the following. In the first 18 months that The Takeaway was on, he had two female co-hosts who pretty much packed up their shit and ran after sharing the mic with him. And, why? Well… I could describe it but it’s really just better to listen.

Nah… I wouldn’t subject you to that.

Basically, there’s no one that Hockenberry doesn’t feel superior to, especially if the person in question is a woman (unless that person works for the government, especially if it’s a man, then they’re experts worth listening to). For an NPR host, I’ve never heard one man make as many veiled sexual jokes about his coworkers as John Hockenberry. I’ve also never heard one who won’t let the other speak for more than two words before talking over them. Say what you will about Robert Krulwich but at least Jad Abumrad lets him get a word or point in now and again.

Hockenberry? Nah. Not if you’re a guest and certainly not if you’re a woman co-hosting with him. Notice that he no longer has a co-host. Or don’t. Honestly… don’t bother listening.

If I thought he was bad on the radio, well… after attending the World Science Festival this last Saturday night and listening to a panel he moderated, I’m all the more convinced that he’s just a terrible host. But rather than describe each and every time he did something awful, I’ll just share some of the tweets I sent in realtime to the official hashtag:

Hockenberry! If I wanted comedy I'd go around the corner! Just ask questions and let the smart people answer. #alienwsf

(The event was hosted at NYU’s Skirball Center in the Village and I was talking about the Comedy Cellar–made famous, maybe, by the opening credits of Louis CK’s Louie–over on MacDougal Street. See what I did there?)

And this is just what I tweeted. (I didn’t want to jam up the feed.) I’ll get into specifics about what he fucked up with the panel more in the next post. But, needless to say, even my girlfriend said that the one woman on the panel, Dr. Sara Seager, didn’t seem to like his bullshit either.

I know the guy is in a wheelchair. But he seemed to spend more time wheeling the fucking thing around the stage than actually listening to what the panelists, people far smarter and knowledgeable on the subject at hand than he, had to say. And, lest you think I’m being harsh on a cripple, bear in mind that not a single panelist moved from their chairs nor did Ira Flatow while moderating an event I attended last year. This wasn’t a stage show where people were expecting movement. It was a discussion about science where, after the first thirty minutes, I was almost expecting Hockenberry to pull a wheelie in his chair just to show he could.

I love attending the World Science Festival. I generally feel that it’s a smart event with a great purpose. But having hosts like John Hockenberry, while seemingly making it accessible to everyone, really just dumbs the whole thing down.

Stay tuned for part two in which I discuss the actual panel!