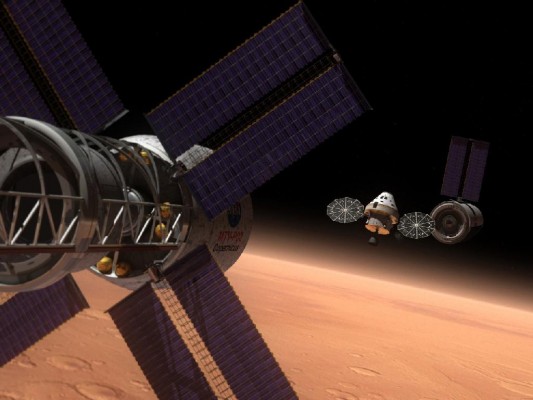 Traveling To Mars, Radiation, and the Storyworld

Wired yesterday posted two great stories on the challenges of traveling to the Red Planet. The first detailed all the technological challenges that need to be overcome before we can get there. In short, it boils down to:

It was the “Keeping the Crew Healthy” bit that I found interesting since it covered the challenge of protecting the crew from radiation during the journey, mostly because almost everything else is pretty well known to people like me who are interested in space travel. But this bit, in particular I got a kick out of:

The trip out to Mars would probably take between seven and nine months, and humans would need to be protected [from radiation] the entire time. Currently, the most feasible solution is to line a spacecraft with water, which would absorb radiation and provide some amount of shelter during a solar storm. But water is heavy, and any added weight on a mission is an added cost. In the future, the capability to create a mini-magnetic field to protect a crew could be developed, but this is years or possibly decades away.

The second article also dealt with the radiation issue:

Crew members in deep space are subject to two types of radiation. The first comes from solar particle events, which are huge explosions from the surface of the sun that toss out tons of radiation and ionized atoms. These events are mostly random, though less frequent during quiet periods in the sun’s cycle. Curiosity, which flew to Mars during a quiet period, recorded five. The good news is just 3 inches of water or aluminum should be sufficient to stop most such radiation, though extremely energetic events could slip damaging ions through.

The second radiation hazard comes from galactic cosmic rays, which are the nuclei of heavy atoms shooting at high speeds through space. These particles continuously provide a low-level radiation background. Unfortunately, when solar activity is low, galactic cosmic rays can more easily enter solar system. Galactic cosmic rays penetrate deep into tissue, injuring biological structures such as DNA. Thick and heavy shielding would be needed to protect against them. Problematically, galactic cosmic rays hitting shields could knock more ions out of the shielding material, leading to a cascading increase in damaging particles. 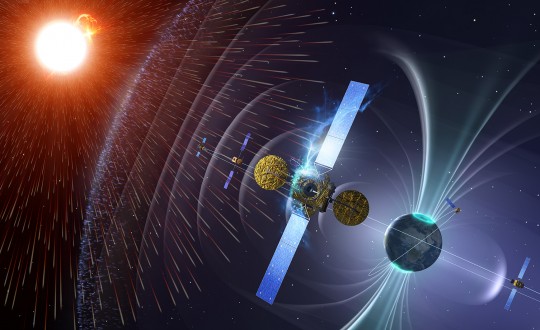 Space… it wants to kill you.

Why am I thrilled by this? Because I feel like it’s a validation of the “technology” I’ve tried to build into the URS storyworld. Because of the engine and propulsion technology in the world, weight and the weight of water wouldn’t be the issue it is today and, thus, every ship has a layer of it. In the article Common Ship Features, under the section Secondary Hulls, I wrote:

Every ship has between at least six inches to a foot of water that fills the space between the two hulls. The primary purpose of this is to absorb the sometimes extremely high levels cosmic radiation that permeate space. Early tests were conducted with various materials but in terms of weight versus effectiveness, water proved to be the best absorption material.

All space vehicles share a certain amount of the same features, be they the relatively small Rayo Tomcat or the enormous NOVA. These are technologies which enable a ship to travel between the stars and to keep their human occupants alive. Most of these features have been with the ships for as long as they have been flying....

Now, of course, galatic cosmic rays apparently aren’t blocked so much by this water layer (it now turns out) but that’s why each ship also has an array of Electromagnetic Field Generators that are supposed to wrap the ship in a low magnetic field like Earth to help deflect these as well. Still, the biggest question I’ve had by readers of my, as yet, unpublished book is why all the ships seem to bleed condensation from their inner hulls. Well… this is why.

Anyway… this is of interest to me because I’m writing a book with characters who spend the majority of their time aboard a ship traveling from planet to planet within the Colonial Star Cluster and, though the storyworld probably falls much more under “space opera” than “hard science” (actually, change that to definitely), reflecting actual science and the challenges that must be overcome adds a degree of reality that can’t help but to make the story better.

Of course, there’s still FTL in the storyworld and a host of other things that aren’t really explained but it’s great to see that, at least in this one aspect, the storyworld reflects a real life possible solution.

Just some food for thought, for anyone else thinking about the storyworld and stories that might be set in it, other problems I’ve been dealing with lately in my story include what the ramifications would be for growing up in a low gravity environment and how to avoid radiation near gas giants.

What are some real space travel problems you’d like to see dealt with that you haven’t really seen before?