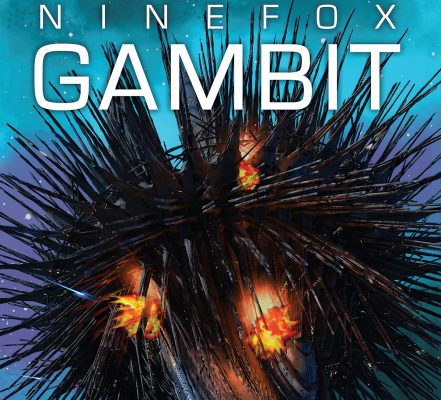 Are you a fan of sci-fi that never bothers to explain anything, dark settings that make Warhammer: 40K seem cheery, a culture that overvalues the metaphorical creatures they’ve chosen to represent themselves with, and a main character that you really couldn’t give a shit about? Then Ninefox Gambit is the book for you!

I’m sitting here trying to think of words to describe what this book is and I don’t know if I can do more than what I wrote above. So… let’s parse it out, a piece at a time.

When I say that this book never explains anything, I pretty much mean that it never really explains anything. Let’s start with the world. It’s ruled by a hexarchy of factions, three high (whatever that means) and three low (again, whatever that means). Two of the factions, the Kel (a “low” military faction) and the Shous (a “high” spy faction) are pretty much what the story center around. Who or what are the other factions? Well… I know there’s a science/tech faction and a doctrinal faction but… the other two? You’ve got me. But what makes one high and one low? No idea. How does this affect how the factions interact with one another? No idea. How did this state of things come to be? Well… there once were seven factions but that seventh had to be eliminated. So now there are six.

So how did the seven faction system come into being? No idea. It was never explained.

Sure, everyone in the story is human. But where in space is this? How long after right now does this story take place? How did humanity come to this? Stop asking because you’ll never find out.

But, the world is a brutal place. We do know that for sure. And it’s brutal because it has to be, you see. Somewhere along the line (don’t ask when) the “government” of this area of space discovered some kind of special mathematics that allowed them to build all kinds of new technology and, of course, weapons. But this mathematics only worked if everyone held to prescribed rituals on prescribed dates and times. And so everything is about keeping to this “High Calendar.” Everyone who doesn’t is a heretic and gets to get wiped out to prevent their heretical influence from affecting the calendar and thus their technology. And weapons.

And, of course, some of the rituals that have to be adhered to involve regular torture because, hey, the world is a dark place.

So there you have it, ritual torture, a kind of religion that is viciously enforced at the barrel of a gun, and some kind of influence that is described as mathematical but, essentially, functions like magic.

Why magic? Because it’s never explained how it works. But it does!

Either way, the magic component is fitting because the characters in this book would fit in pretty well to the Game of Thrones world. You know how Danny is always on and on about “I’m a dragon!” and the Lannisters call themselves lions and the Starks are all wolfs? Yeah, well… it’s pretty much the same here. A guy is a fox or someone is an ashhawk in some kind of pose that means something. What does it mean?

…I’m going to keep giving you the same answer.

But it sure means a hell of a lot to the characters. Except… they’re not fucking fantasy characters! They’re supposed to be in a sci-fi world that is driven by complex mathematics! Surely, people in this situation would realize that the whole animal metaphor is shallow and/or kind of dumb, right?

Which leaves me with the last thing, which really should be the first thing, the characters. There really are only two, Kel Cheris and Shous Jedao.

So… when you join a faction, apparently you take the faction name as your surname. Which, I guess sounds good, but there’s no one else named Cheris in the entire Kel faction? I mean, wouldn’t that make keeping track of who is who a real pain the balls? I guess you’d better hope that someone you share a name with doesn’t owe anyone money because they could be coming for you.

Anyway… Cheris and Jedao. Cheris is an infantry captain who, when asked to present a plan to take back a space station (I assume it was a space station, there’s nothing explicitly in the text saying it’s in space and it was always referred to as a “fortress” so… I don’t know…) she suggests dusting off a “mad man” general who has apparently been on ice since when he was tasked to take back a fortress four hundred years ago and he killed everyone.

There’s something called the “black cradle” that he’s been stored in the whole time, dusted off now and again to fight some battle, and then stuffed back inside for another day. He’s not strictly alive nor is he strictly dead. He’s somewhere in between and referred to as a “shadow” throughout the book.

It basically means he’s Patrick Swayze to her Whoopi Goldberg in Ghost.

As a reward/punishment for thinking about using this guy, Cheris is picked to bond with him which basically means he’s Patrick Swayze to her Whoopi Goldberg in Ghost. Only she can hear him and sometimes he’s just gotta sing “Henry VIII”. (It’s too bad I just thought of this comparison. I mighta liked the book more if I’d thought of it while reading.)

Cheris gets a bump to general so people will follow the orders Jedao is supposed to communicate through her and off to war we go.

And, my god, this really is boring. But we’re supposed to feel for Cheris who, rather than just being a common soldier is now in the position to march them into the meat grinder and think Jedao is a mad man trying to destroy her sense of morality in the name of sound tactics but… frankly, Cheris was an empty vessel all through the book and, maybe it says more about me than the book itself, but I think there was a solid case to be made that Jedao was only considered insane because he was the only sane person in an otherwise absolutely fucked up universe. Sure, he did horrible things. But it was never made clear why the things he did were worse than the things the “Hexarchate” did every day.

So… boring “sympathetic” main character. And another main character for which there was just a cognitive dissidence in the way he was described versus the things he said the entire time. And then a bunch of others who were cardboard cutouts.

Normally I try to find something positive in every book I read but this one… I wanted military sci-fi (I was promised military sci-fi!) when I picked this up. Instead I was given high fantasy in space (I think it was in space) with dull characters and an even more dull plot and very little conflict at all. (Conflict in the between characters sense. The whole book was basically a siege.) So… yeah…

One thing positive I will say was that the writing was beautiful. I just wish it had characters or plot written as well as the words were strung together.