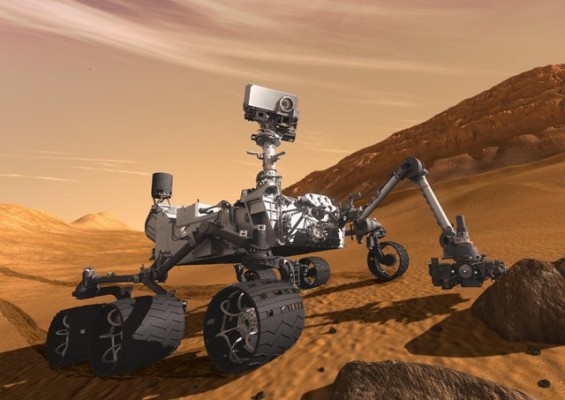 I know, I know, how lame it is to report on a new bill aimed at reforming NASA. But this one might actually be a good thing.

To set it up, I’d like to tell you about this Tom Sachs show my girlfriend, my friend (and sometimes blogger here) Mark Harris, his wife, and I went to at the New York Park Ave Armory. It was to see Sachs’ Mars exhibit where essentially they stage a kind of performance art spectacle of how a manned Mars mission might go, with all of the props made from recycled materials and being built as kind of living, useable performance pieces.

At the time, I admit, I was divided on it. I liked the obvious respect they had for NASA and what it does. The day we went, it began with a “breakfast” in which we heard Sachs, two of his “Grummans”, and three NASA scientists speak, including the project lead for Curiosity and the man who developed not just the landing system for Curiosity but also for Spirit and Opportunity. To hear them speak, it was obvious that Sachs was wowed by what NASA, and JPL in particular, were doing. But the actual show left me a little cold.

Now, anyone who’s ever watched NASA do its thing knows that it’s 9/10ths checklists and 1/10th explosions of the coolest sort. I mean, they have a checklist for everything. As did this show. In fact, so detailed were these checklists that they were checking things off like the “Celebration Refridgerator” which was filled with bottles of Veuve Clicquot and the landing module for a “Recreational Device” that was essentially a Walkman. 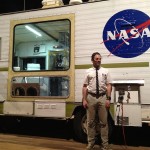 Honoring or parodying NASA? I choose honoring at this point.

Funny? Yeah, I guess. But, at the time, I had a hard time telling whether it was meant as inspiration or parody.

And, I guess, there’s a fine line.

Inspiration says, we know why you’re doing these things and we don’t have them but, because we’re doing a twelve hour live presentation, we’re going to fill it so that people understand the work it takes to make these things happen. Parody, on the other hand, doesn’t know why these checklists exist and are just making them up to have them like a real NASA mission might.

In retrospect, I now believe it to be the former.

All this aside, the really interesting bit was from the “breakfast” before hand where the project lead–who I’m kicking myself for not remembering the name of–expressed his frustration for how NASA is now funded. What he said was, something to the effect that, “No project is funded that can’t be completed in a four to eight year political cycle.”

Because of presidential elections.

How the James Webb Telescope has avoided this has literally been a political miracle. But it’s the rare example.

Thus, the reason I was thrilled to see this:

Rep. John Culberson, R-TX, along with Rep. Frank Wolf, R-VA, is developing a bill that will attempt to rationalize NASA’s budget process and provide some long term continuality in its administration. The bill would model the way NASA’s funding and administration in the same way that the FBI is.

First, a NASA administrator would be named to a ten year term. The intent is to provide some continuality in the way the space agency is run and to remove it, as much as possible, from the vagaries of politics.

Second, NASA funding would be placed on a multi-year rather than annual cycle. This is of particular importance to the space agency because the majority of its high level projects take several years to run their course.

I found this on Slashdot and its post noted that there might be a few problems, including NASA being stuck with a poor administrator for ten years or possibilities that it might be unconstitutional. As for the former, I don’t necessarily see why this is a problem. As the article noted, the bill is based on the structure of the FBI. While it may make sense to have an FBI director serve across administrations for “justice” purposes, it makes less sense for a NASA administrator who might be able to be replaced more easily with some language changes in the bill. 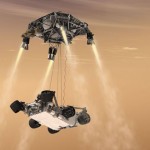 Imagine if this had been canceled because it wasn't thought of as a priority.

As for the unconstitutionality of the bill… well… seriously. After all the unconstitutional wars, spying programs, and assumed presidential powers of the last twelve years, does anyone really think that funding an agency for several years ranks high? Besides that, I’ve actually read the Constitution and don’t see anywhere where it says Congress can’t fund something for several years starting now. The national budget is, really, just a law. A spending law but a law nonetheless. If the law says the next president has to spend the money already allocated I can’t see this as being a problem, constitutionally speaking.

But I do think it’s a good idea. Why can’t a Congress now pass a law to spend money in the foreseeable future to achieve a goal?

Sure, one could make an argument that today’s Congress could pass a law mandating, I don’t know, but imagine some spending you don’t like, for the next hundred years and the country being burdened with it. And, yeah, that’s a possibility. But it doesn’t mean the law can’t be repealed. Just like I think NASA’s funding could and should be able to be in this bill. But it would mean Congress actually acting on it rather than not doing anything. Thus, NASA would get its money in a deadlocked Congress and be able to pursue its mission unless otherwise told not to. 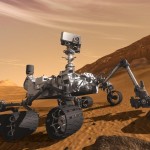 Wouldn't you fund a project like this for more than a year?

I say this as someone who’s in favor of a deadlocked Congress. My motto is that the government that acts least, acts best. But if something is truly a national priority, as every president since Kennedy has claimed space to be, then, why not fund it in advance?

Curiosity showed that the American people–hell, the world–are still deeply interested in space exploration. Would ensuring a project that’s approved today still have funding five to ten years from now really break our banks and destroy this country? Especially when NASA accounts for less than 1% of the national budget?