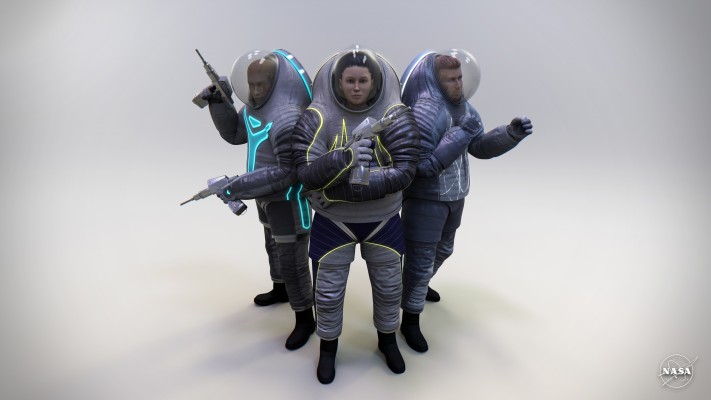 Tragically, I only just found out about this through Wired today but it’s still pretty interesting. Apparently, NASA has been redesigning the spacesuit, looking at making one that will function on terrestial bodies we might hope to visit, like Mars and the Moon again.

Of course, because NASA lacks a clear direction… take it away Wired:

One of the biggest difficulties is the lack of direction on where we’ll be heading next. A return to the moon? A manned mission to Mars? Each destination will lead to vastly different design criteria.

“It all depends on where you’re going and what you’re doing,” says Ross. “Each spacesuit is tailored for the mission, what tasks the astronauts will be performing, where they’ll be doing them, the planetary microgravity, how hot or cold it is, how many times they’ll be doing it, and so on.” In order to make progress in what could be a paralyzing array of choices, Ross uses Mars as a baseline, noting that gear suited for the red planet can be reconfigured to serve outliers relatively easily.

Anyway, if you were looking at the back and wondering, “What the hell?” They have an answer for you:

The most conspicuous innovation is a rigid shell on the back, called the “Suitplate Interface Port.” The port allows astronauts to enter and exit the outfit by docking with a vehicle, forgoing a trip through an airlock, and pulls double duty as the attachment point for the Portable Life Support System—the backpack that provides oxygen, thermal regulation, and other functions.

Which is actually a pretty cool innovation when you think about it. Just back into your vehicle or whatever and pop out. I’m kind of surprised I haven’t read or seen this in sci-fi. Seems like it would make things a whole lot easier.

Of course, they’re not really sexy. If you’re wondering, what the hell happened to those skin tight numbers I wrote about a couple of years ago (because I’m sure you’ve been reading this blog all along), here’s what they say:

As cool as the Z-2 is, why not shoot for something sleeker and more form-fitting like the mechanical counter pressure (MCP) suits being developed by MIT’s Dava Newman? NASA’s engineers are big fans of the concept, but point out that for these kinds of suits to work, breakthroughs in material science will be required, as well as careful tailoring. Current concepts leave the crotch and armpits dangerously unsupported and pressurizing a standalone helmet creates tricky design challenges. This isn’t to say it’s not possible, but is likely decades from feasibility.

Bodysuits inspired by Star Trek might be a ways off, but Ross’ team has tried to add a little visual flair to the project by developing three versions of the Z-2′s outer layer, each laced with electroluminescent wire and decorated with futuristic-looking patterns. The designs were conceived of by students at Philadelphia University and an engineer on Ross’ team, Shane McFarland, created a website to crowdsource a decision about which look should be manufactured. Over 200,000 votes were cast and a decision is due at the end of April, yet no matter which design is selected, the vote serves as an encouraging sign about the public’s interest in NASA’s mandate.

Which brings us to the vote. They basically had three variations on a theme which I have helpfully provided here. But, first, I guess I should say that I’m really not wild about the design of the suit in the first place. Personally, I like the more tailored look of the “Biosuit” and wish that they’d spend the time developing the technology to make that happen since it doesn’t seem like we’re going anywhere really fast anyway. I mean, if we’re twenty years off from actually launching a mission to Mars (here’s hoping), why spend $4.4 million on a suit that will never set foot on the red planet when we can be developing the possible technologies around a suit that might?

So here are the suits. 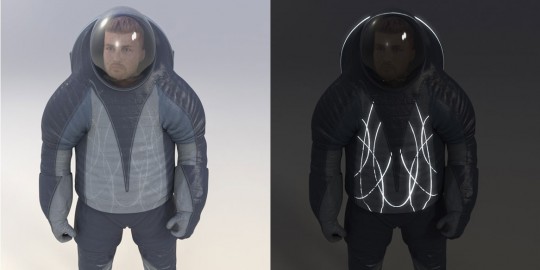 The space suit otherwise known as “my god! What is that on you!”

Honestly, I don’t like this one because it looks like someone took an EVA suit from Strek II or III (or was it VI?) and went crazy with those light strips from ThinkGeek. I just think that if you need the astronaut to be visible in the dark (which is probably a good idea) you could do better than making it look like the tentacles of a jellyfish are coming out of your nipples. 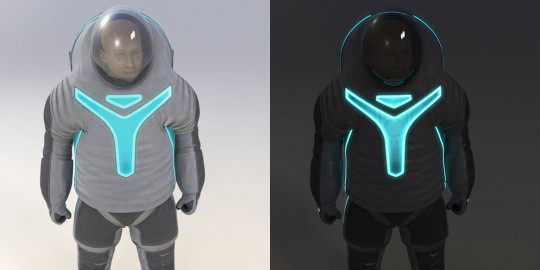 This one reminds me of a story a buddy of mine once told me about ten years ago. He was at his office and this intern who was eighteen or nineteen comes in, almost jumping up and down with excite. He comes over and says, “Yo, yo, yo! I just saw this movie last night! It was crazy! It was all kinds of, like, vector graphics and shit.”

To which, my friend said, “You mean Tron?”

At which, the kid almost explodes, saying, “Yo, man! You heard of it! That’s crazy!”

And that pretty much sums up my thoughts. 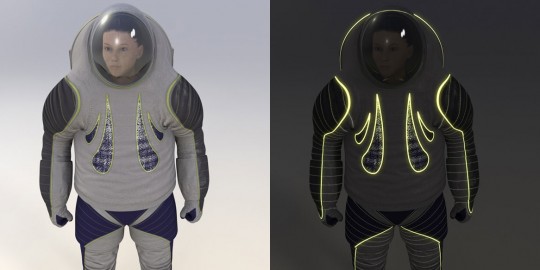 I’m going to let NASA do the description on this one:

“Trends in Society” is based off of just that: being reflective of what every day clothes may look like in the not too distant future. This suit uses electroluminescent wire and a bright color scheme to mimic the appearance of sportswear and the emerging world of wearable technologies.

Now, as a man, I thank the makers of yoga and running pants across the world for doing something that actually improved it. They have made walking down the sidewalk a much more pleasurable experience and have figured out a way to mold what otherwise might be okay into something eye-catching. I’m sure women thank them for the same reasons. But I don’t know that a spacesuit designed to look like a Nike throwaway pattern is the trick here.

Remember that the lines and patterns on said yoga and running pants are designed to be slimming and shaping. These just look like afterthoughts. As if the designer said, “hey, we have all that space on the chest. I think I saw something at Lulu that would look great there!”

I feel like I spend half my posts about NASA ragging on them. Which sucks because I really do admire them for what they’ve done. And maybe that’s why I’m so hard on them. They put men on the moon. They built a giant (apparently disposable) space station. It feels like lately they’re just throwing stuff at the wall to see what will stick. And I’m not impressed with the stuff they’re throwing.

Oh, and in case you are curious, 63% of the people who voted favored the “Technology” design…