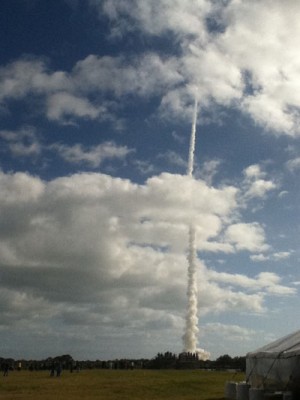 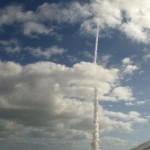 If you've ever seen a launch in Florida, you know how cool this is.

The Mars Science Laboratory launched on Friday, and if your weren’t paying attention, you should’ve been. Nicknamed “Curiosity”, the newest rover was strapped to the nose of an Atlas V rocket and shot into space for an eight month journey to the red planet. To put this into perspective, be sure to check out the infographic of missions to Mars to realize how difficult firing something at Mars and making it a success is.

This baby is equipped with HD cameras and will search for signs of habitability and signs of life, past or present. It also has a drill to break rocks to examine the planet’s composition.

Wired describes the rover as:

[…] one-ton Mini Cooper-sized rover, […] the largest machine NASA can currently put down on the Martian surface

Yeah. You read that right, a rover the size of a fucking car! A small car, sure, but a car nonetheless.

This is cool on a couple of counts. First, if you’ve ever been lucky enough to see a launch, and I’ve been lucky enough to see two, it’s an awesome reminder that putting something into space today is still a massive effort. A drive to the store for a pack of smokes, it is not. NASA makes it look routine but that’s just because they’re that good at it. I mean, think about it, they make launching shit into space look routine! 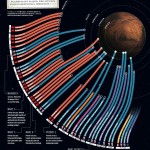 It's the planet next door but getting stuff there is hard.

Secondly, and maybe this is just because my personal politics run to the libertarian, but doing stuff like the Mars Science Laboratory seems like the kind of things government should be doing.

I know, I know… how does landing shit on Mars have anything to do with the government’s core responsibilities?

It doesn’t. Not really. Except that, right now, while the technology remains hugely expensive and complex and there’s a lack of private interest in this kind of thing, it’s the government that can help expand human knowledge in this area. Yeah, maybe US$2.5 billion is a little stiff for a price tag but if Curiosity runs like the Spirit and Opportunity did, then we might get years of use out of this, and who knows what might be found.

And if you think I don’t realize what a flimsy case this is for government spending, believe me, I do. I’m sure everyone justifies their favorite government program the same way. But in the case of science, it literally benefits everyone. And a mission like this, even at US$2.5 billion, helps us understand the universe we live in all the better.

I’ll keep an eye on this mission as it progresses. But stay tuned for August when this sucker lands. It’s going to be epic.