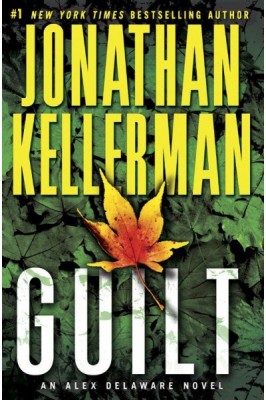 It may seem odd to review a crime thriller on a site dedicated to science-fiction but, because it’s a storyworld site, I thought it might be interesting to include a discussion of one of the longer running crime series into the mix. 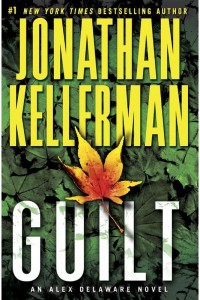 I’ll admit, up front, that I’m a fan of Jonathan Kellerman. At this point, I think I’ve read everything he’s published that’s part of the Alex Delaware series and now look forward to picking up his yearly installment. This year was no different. I learned about Guilt being out by seeing the ad on the back of a bus and, by the next day, had it in my hot little hands.

For those who aren’t familiar with the genre, crime thrillers such of these can usually be paint by numbers. For instance, every Delaware book features the following:

I’m not kidding. That’s the diagram of some twenty plus books Kellerman has written and published to great success. And, you know what? He does it because it works. And with Guilt, it continues to.

The relationship between Sturgis, an openly gay detective in LA’s West Side homicide squad, and Delaware is interesting and witty. Both men bring something to the table and they are rarely on the same page, parroting one another like Brad Pitt and George Clooney in Ocean’s Eleven. They have frequent disagreements and it’s part of Delaware’s character to investigate by himself if Sturgis won’t help out, often leading to new breaks in the case.

The plot, too, is sufficiently twisty so that you can never guess from the first page who will ultimately be responsible and/or involved. In short, I call these books my “candy” because I can read them in a day, often do, feel fulfilled afterwards but don’t have to deal with new inventions in the English language like the Brooklyn lit writers try and do.

But, because this is part of a long running series, and thus a “storyworld” of its own (even if it mirrors contemporary LA), it does leave me with a question. Which is, how long can the series continue?

I am pretty certain that the first book was written in the late-70’s and published in the early-80’s. And Alex Delaware was described then as being in his mid-thirties. If Kellerman’s book chronology matches the real world’s (not an unreasonable assumption given the introduction of the Internet and cell phones to even iPhones as the books progress), that would make the main character now in at least his mid-sixties. And though certain things have aged–like his Cadillac, now on it’s third engine–Delaware himself seems permanently in his late-forties to early-fifties.

I suppose my question becomes, at what point do you retire a pair of characters, especially when Sturgis is actually probably already past the age of retirement for the LAPD.

Kellerman’s solution to this may also be one of the few problems I have with the latest books. His character description. For new characters, it’s not a problem and his short paragraphs noting the most important features are usually pithy though he does tend to focus a little heavily on what brands they wear. (But, hey, it’s LA, so that makes sense.)

But with Sturgis and Delaware, I find he doesn’t even try to describe them any more. A new reader, picking up this latest book wouldn’t have much of a picture of the two main characters except that Sturgis had gained some weight around the middle, had terrible taste in clothes, and in the middle of the book, discover that he had some acne scars from his youth. There wasn’t even that much about Delaware.

Is this just to avoid the age topic all together? I, personally, believe it is and that it’s holding back what could be an interesting plot point all by itself. Kellerman has already written a title with younger peripheral characters and I wonder if that’s his way of dipping his toe into the time-to-retire-Delaware-and-Sturgis pool.

Still, Guilt is a solid and strong crime-thriller book and, while not the best in the series, a good new addition. But at some point I would like to see Jonathan Kellerman, like Lee Child of the Jack Reacher series, begin to address the age of his characters.