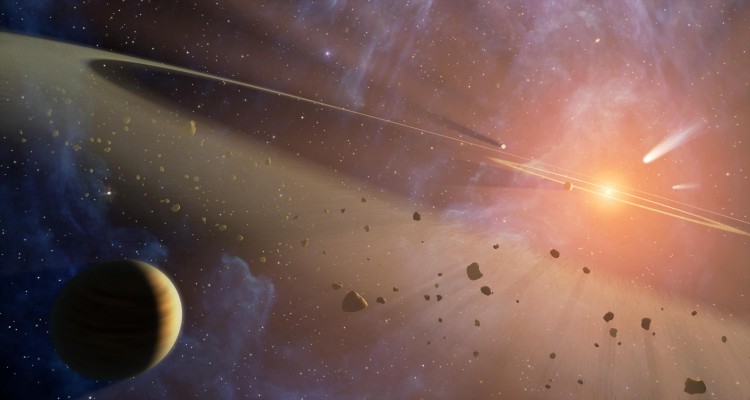 There’s been a bit of an embarrassment of riches lately when it comes to space science topics to blog on. The only limiting factor, as far as it comes to here, is the time that I’ve had to sit down and write a post. (Let me know if you want to guest post!)

This story, one that I saw last week on Ars, was just too interesting to let it go by. It’s called Habitable exoplanets are bad news for humanity and discusses the Fermi Paradox, the question that wonders if among the billions of potentially habitable planets, intelligent life is common, then where is it? This was topical because Kepler-186f was discovered 422 light years away and has been determined to be in exactly the right habitable zone for its star and appears to be almost exactly the size of Earth.

So then, if life is common, and Earth has the perfect conditions to encourage it, should we be happy or sad that we don’t have any evidence yet of life there?

This apparent absence of thriving extraterrestrial civilizations suggests that at least one of the steps from humble planet to interstellar civilization is exceedingly unlikely. The absence could be because intelligent life is extremely rare, or because intelligent life has a tendency to go extinct. This bottleneck for the emergence of alien civilizations from any one of those billions of planets is referred to as the Great Filter.

What exactly is causing this bottleneck has been the subject of debate for more than 50 years. Explanations could include a paucity of Earth-like planets or self-replicating molecules. Other possibilities could be an improbable jump from simple prokaryotic life (cells without specialized parts) to more complex eukaryotic life—after all, this transition took well over a billion years on Earth.

Proponents of this “Rare Earth” hypothesis also argue that the evolution of complex life requires an exceedingly large number of perfect conditions. In addition to Earth being in the habitable zone of the Sun, our star must be far enough away from the galactic center to avoid destructive radiation, our gas giants must be massive enough to sweep asteroids from Earth’s trajectory, and our unusually large Moon stabilizes the axial tilt that gives us different seasons.

While the emergence of intelligent life could be rare, the silence could also be the result of intelligent life emerging frequently but subsequently failing to survive for long. Might every sufficiently advanced civilization stumble across a suicidal technology or settle into an unsustainable trajectory? We know that a Great Filter prevents the emergence of prosperous interstellar civilizations, but we don’t know whether or not we already cleared it in humanity’s past or if it awaits us in the future.

For 200,000 years, humanity has survived supervolcanoes, asteroid impacts, and naturally occurring pandemics. But our track record of survival is limited to just a few decades in the presence of nuclear weaponry. And we have no track record at all of surviving many of the radically novel technologies that are likely to arrive this century.

So basically, we could still end up killing ourselves. And, thus, the solution to the Fermi Paradox is that there aren’t a whole lot of advanced civilizations out there because they either die in an embryonic state or because they kill themselves once they achieve a technological state. This is actually the theory that my friend Mark Harris (and guest poster) believes in.

In fact, we discussed this just the other night and he believes that precisely because of this proposed tendency for civilizations to kill themselves, we’re not really the masters of the planet. That title should go to cockroaches, tardigrades, bacteria, etc.

I take a somewhat different view. And it’s the view that I express in the URS storyworld. I believe that there are probably an unlimited number of habitable planets but that advanced life is exceedingly rare because the conditions it takes to emerge are rare. For instance, before the rise of humans, dinosaurs ruled the planet for almost two hundred million years. But they weren’t intelligent. It took another epoch event to wipe them out to allow mammals (and eventually humans) to rise to dominance.

So… just because there’s life, it doesn’t mean there’s intelligent life. I personally refer to this as a “garden universe” as opposed to the Star Trek “populated universe”.

But, assuming advanced life does exist on Kepler-186f, and assuming that its civilization is more or less as old as ours, we still wouldn’t know because, if they’ve been broadcasting signals for about as long as we have, it would still take another 300 years for them to reach us. But if they’re less advanced but just as intelligent, it could be thousands of years before they start broadcasting.

I suppose what I’m trying to think out as I write is that the Fermi Paradox doesn’t really explain anything. Especially not when the sheer amount of distance that is our galaxy is considered. There may very well have been several thousand advanced civilizations, some who surely wiped themselves out, some who perhaps died from factors outside their control (think disease pandemics). But there may be several thousand more who have survived or are on the rise that are just too far away to detect much less to travel to visit. After all, we’re all constrained by the speed of light.

I feel as if the flaw behind the Fermi Paradox is that it assumes that a sufficiently advanced civilization would figure out a way to overcome the universal speed limit but that just may not be the case. (Although I certainly hope we do.)

This is certainly more hopeful than the idea that every species basically has an expiration date, one set either by galactic events or by themselves.

What do you think? Is the universe empty because every advanced civilization has basically killed itself off? Are we alone out here?