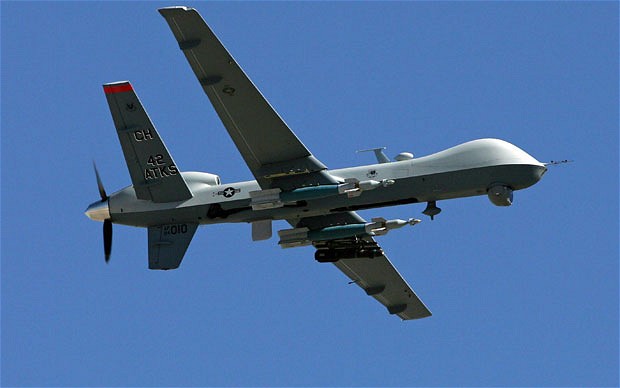 In a move that was one hundred percent predictable since the use of unmanned aerial vehicles (UAV) or “drones” became available to domestic police forces what was once only available to the military or CIA, a police department is now asking permission to weaponize the things.

You know, death from above. Though, when drones first started being used domestically, they swore they’d only be used for surveillance. But, of course, everyone knew that was said with a wink, right?

Well, a police force has asked. But what’s perhaps even more shocking is their justification for why they might need an armed drone:

Chief Deputy Randy McDaniel of the Montgomery County Sheriff’s Office in Texas told The Daily that his department is considering using rubber bullets and tear gas on its drone.

“Those are things that law enforcement utilizes day in and day out and in certain situations it might be advantageous to have this type of system on the UAV (unmanned aerial vehicle),” McDaniel told The Daily.

Which, by the way, having read it again, doesn’t even sound like they’re asking for permission, just considering what to arm it with. But secondly, rubber bullets and tear gas “are things that law enforcement utilizes day in and day out?”

Forgive me for asking, but has Texas been wracked by daily riots that haven’t made the news?

If the sheriff’s office in Montgomery County, Texas, are really shooting people with rubber bullets and tear gas every day, that’s not a county I ever want to visit. That feeling only added to by the sheriff’s reasoning for why the people he’s supposed to serve shouldn’t worry about the department flying UAVs over their homes:

“We’ve never gone into surveillance for sake of surveillance unless there is criminal activity afoot,” McDaniel told The Daily. “Just to see what you’re doing in your backyard pool — we don’t care.”

Remember for a moment that Texas was home to infamous Laurence v Texas case where the Supreme Court ruled that a state couldn’t make it illegal to engage in specifically gay sex inside ones own home, presumably allowing police to kick down people’s doors if they suspected that it was happening. Thank Christ, or who ever, that law enforcement agents didn’t have access to drones before that law was overturned. Then they may very well have been interested in what you were doing in your backyard pool.

Lastly, when a law enforcement official says that I should just trust them with the use of an invasive (and now very dangerous) piece of equipment, I always feel a cold shudder run down my spine. The history of police departments and technology is usually one where the police get to use a new toy and our actions are all now a little more public, regardless of whether we want them to be or not. Consider everything from the use of drug dogs to heat sensors to GPS and cellphone tracking.

Fortunately, in some of these cases, the courts have curbed the police’s ability to follow us but in many, many more, they’ve actually given the green light for them to go ahead.